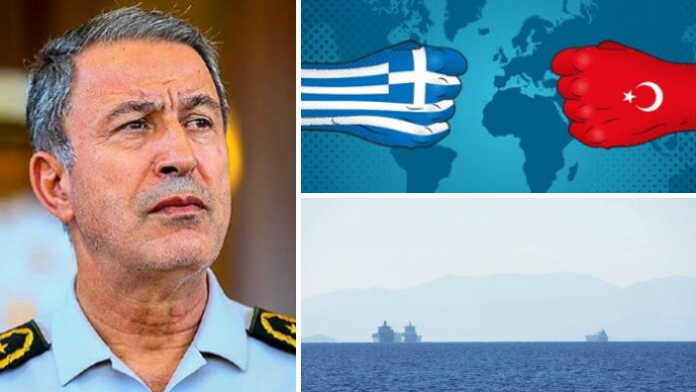 A Turkish warship issued a warning to a Greek research vessel to prevent it entering what Turkey considers its territorial waters, Turkey’s Defense Ministry said on Wednesday.

The showdown came a year after tensions in the eastern Mediterranean threatened to escalate into open conflict between the neighbors and NATO allies.

The Nautical Geo survey ship was confronted by the Orucreis frigate as it attempted to enter Turkey’s continental shelf, the ministry said.

“The ship in question was radioed and warned not to enter the Turkish continental shelf. There was no physical intervention,” the ministry added.

It condemned Greece’s “unlawful, provocative and expansionist initiative” under the guise of scientific research and said Turkey was “determined to protect and defend its rights and interests.”

The ministry didn’t say when the incident occurred, but maritime tracking services showed the Maltese-flagged Nautical Geo docked Wednesday at Iraklio port on the Crete.

Earlier, Greek Foreign Minister, Nikos Dendias, briefed his European counterparts on the sidelines of the United Nations General Assembly over the harassment by Turkish warships.

According to diplomatic sources, Dendias informed his counterparts on the “unacceptable move” of the Turkish warship which harassed the Maltese-flagged vessel as it was carrying out scientific research inside the Greek continental shelf – as designated by the Greece-Egypt maritime deal of 2020 – in an area 10 nautical miles east of Crete.

Greece and Turkey have been competing over the exploration of gas reserves in the eastern Mediterranean amid a lengthy dispute over their respective territorial waters. Turkey also considers itself the guardian of breakaway northern Cyprus’s energy rights in the region.

In the summer of 2020, Greek and Turkish warships shadowed each other across the eastern Mediterranean as Turkey sent research ships backed by its navy to search for hydrocarbon reserves.

Although there was no direct conflict, the danger was illustrated when a Greek frigate collided with a Turkish warship in August. The standoff also drew in France, the United Arab Emirates and the European Union in defending Greece’s rights in the face of what they declared to be Turkish provocations.

The confrontation led Athens to bolster its naval and air forces with new defense equipment, including 24 French Rafale jets.

Last week, Athens issued a Navtex warning that the Nautical Geo would be operating off the eastern coast of Crete, which Turkey considers its waters and is covered by a 2019 maritime deal between Turkey and Libya. The Navtex expired on Wednesday.

Senior Greek and Turkish officials have met twice this year to discuss their maritime disputes, the first talks on the long-standing issue since 2016.