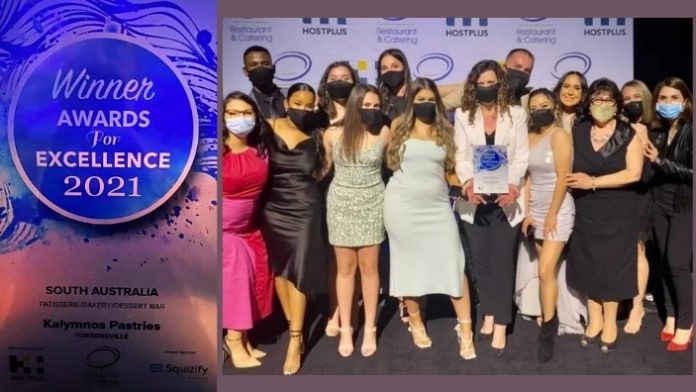 The Restaurant and Catering Industry Association of Australia has unveiled the winners of this year’s SA Awards for Excellence.

Greek businesses in South Australia were among the winners of the awards.

Kalymnos Pastries in Torrensville took home the award in the patisserie, bakery, and dessert bar category.

“We love what we do and what we stand for,” Kalymnos Pastries owner and pastry chef George Diakomichalis told The Greek Herald.

“Following on from being judged [as the] number one patisserie in Australia, Kalymnos Pastries once again earned the opportunity to represent South Australia in the National Restaurant and Catering business awards.

“So humbled and proud to represent our Greek culture and family as proud South Australians and do it consistently well over so many years. Being recognized and appreciated by your customers and peers at the Restaurant and Catering Business Awards is the ultimate.”

The Greek Herald has also requested a comment from Estia Restaurant