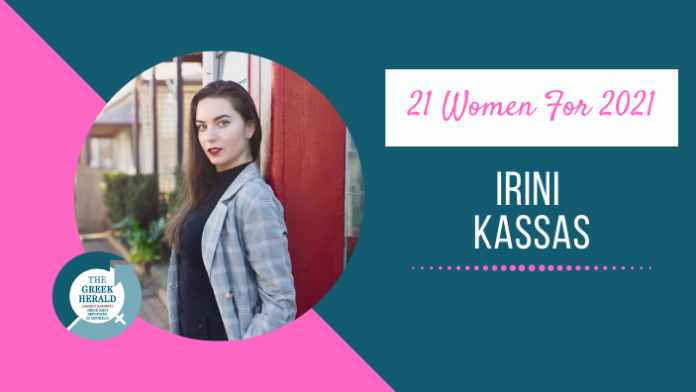 Irini Kassas’ Australian odyssey is a modern replication of the journey made by Greeks during the post-WWII migration, demonstrating kindness as she devotes her life to the development of one of Australia’s largest cities.

Born in Greece to a Greek Australian mother and Greek-born father, Irini left her homeland at the age of 14 to move to Newcastle with her family. While longing for her European home, Irini fully embraced Newcastle and strived towards making it one of the nation’s greatest cities.

“I felt like it was just another adventure, which certainly has been,” Irini Kassas said to The Greek Herald.

“And I felt I truly wanted to keep my culture and being able to share that with other people and kind of see where they stand as well.”

Growing up in a small Greek village, Irini said there was a big concept of community in her hometown. Moving to Australia, she wanted to keep that sense of community with her and share it with everyone she knew.

“I felt like it was something in my blood, something in my character that I wanted to engage with other people, getting to know my new surroundings and what opportunities there were for me,” Irini said.

In 2017, Irini received a sponsorship by her university, The University of Newcastle, to take part in a global ‘Work to Change the World Program’ in Hanoi, Vietnam. The program featured 800 delegates from universities and organisations and gave Irini her first taste in foreign affairs, influencing her to pursue it as her dream career.

“I attended in my first year… I really enjoyed the atmosphere at the conference and I got to meet a lot of people from around the globe,” Irini said.

“What astonished me was that it was university students organising the conference more than people who had graduated and worked for a company.”

“I just really loved the concept that such young people like myself could do something extraordinary.”

“We welcome parties who are interested in making something in our city and we try and find the appropriate authorities with appropriate representative for them to come into contact with,” Irini said.

Irini said the company is currently in the process of commencing an education program with the University of Newcastle, through the ‘Newcastles of the World’ alliance.

“The Newcastle in Denmark, Nyborg, want to create a project where students engage via video, so they make more films about what it’s like in Newcastle, and it’s called ‘Learning from other Newcastle’s’,” Irini summarised.

“So we are currently in the process of promoting and implementing that with our local primary schools.”

The projects established with Newcastle International weren’t the first steps made by Irini in providing a service to her city. Since 2015, Irini has volunteered for a number of community events and city development projects, including CityServe, the Newcastle Museum and as a unit volunteer for the NSW State emergency services.

“It was just something that I rolled into, from one opportunity to the other, starting off as a prefect at Newcastle High, to volunteering for the Newcastle Museum, all those other opportunities arose,” Irini said.

“Now I recently did the state emergency services, which is an active opportunity for a lot of people to get involved in.”

Irini’s willingness to donate her time derived from the struggles faced after moving to Australia from Greece. During her first year in the country, Irini lived with her grandmother in a small flat with no Wi-Fi access and spent many hours in either the public library or after hours at school doing work.

“These were the small challenges that I kind of faced, and it never bothered me,” Irini said.

“Even to this day, I’m just grateful that I even have the opportunity to have this and I guess that’s one of the reasons why I have resilience to something.”

“It’s a bit like Newcastle; It’s a great city, but we are training as well.”

Irini’s efforts in helping progress Newcastle saw her receive the city’s Young Citizen of the Year award in 2018, and to this day she continues to have an active involvement in the community.