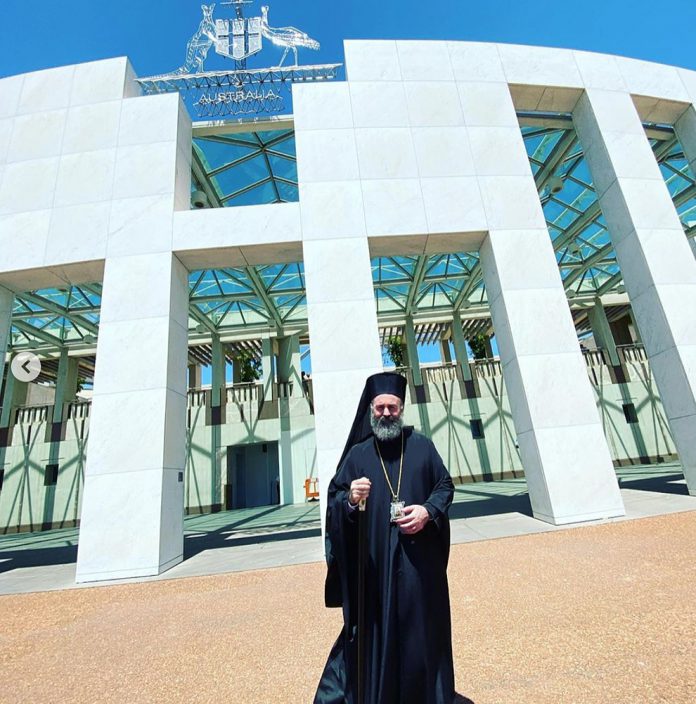 The Honourable Archbishop of Australia, Mr Makarios, on Wednesday November 27, paid a formal visit to the Greek Embassy in the Australian capital of Canberra.

At the entrance of the Greek Embassy, the Archbishop and his entourage were greeted by the staff and the Embassy’s spokesman, Mr. Ioannis Ferentinos, who had an extensive discussion with His Eminence on issues related to New Hellenism, such as Greek education, the Greek language and the Church.

Their discussions focused on the great importance of the recent bill passed, which gives voting rights to Greeks abroad.

His Excellency said, “I welcome the new bill and congratulate the Government of Mr. Mitsotakis on this initiative. The Australian Archdiocese will, in effect, support this right of our Greeks to vote. As the representative of all the clergy and all the Greeks of Australia, on their behalf I express our gratitude and our gratitude to the Greek Parliament and the Prime Minister.”

Note that a new Greek Ambassador to Australia is expected to arrive in Canberra at the end of the year.

His Eminence is in the Australian capital to attend a Commonwealth House meeting on Thursday, November 28, and will hold a series of meetings with Ministers and Members of the Commonwealth.