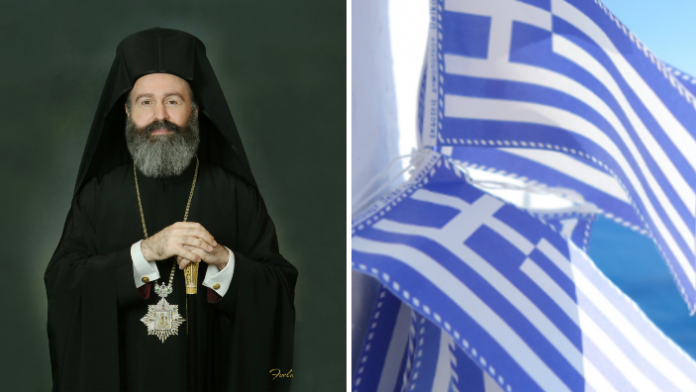 His Eminence Archbishop Makarios of Australia has issued a message today to mark the 81st anniversary of OXI Day.

In his message, His Eminence pays his respects to the Greek people who “became an example of resistance” during WWII and encourages the younger generation to learn about their ancestors and the ideals they fought for.

This time, 81 years ago, a small, two-syllable word signalled to history to begin writing another glorious chapter about the Greek people. The heroic, “OXI” (NO) came out effortlessly from the lips and flooded the hearts of our proud ancestors, not allowing fear to penetrate and be overwhelmed by turmoil.

By bravely raising their stature in the face of the clearly stronger aspiring conquerors, the Greeks became an example of resistance to other peoples and inspired them to fight with the same self-denial against the emerging forces of fascism and Nazism.

From the outset, our poor people knew they would pay a high price for saying “NO”. But our young men marched resolutely to the frontline, consciously accepting to sacrifice even their lives. For these brave men, we reverently bow our knees today and pay tribute to those who gave their blood for the homeland. Together with them, we also honour the mothers, fathers, their wives and all the Greek people who joined, with admirable solidarity, in that sacred struggle. The best way to honour our heroic ancestors is no other than to reflect on the striking “NO” that they shouted and to continue to serve the high ideals and values that are concentrated in these couple of letters: the love for the homeland; the commitment to dignity, freedom and democracy; the defense of all that is sacred and holy of our Nation and Faith.

Today’s anniversary brings before us the heavy responsibility we have inherited to continue to journey with the ideals of our ancestors as well as to ensure that the younger generations also attain these ideals. Our children must have knowledge and awareness of who they are, where they come from, and for what values their ancestors fought. It is also imperative that they know that the Orthodox faith has always strengthened the Greek people, in every adverse situation of its historical course.

It is no coincidence, after all, that our National Day coincides with the feast of the Holy Protection, during which the Church honours the person of the most-holy Theotokos, whose grace covers and protects the people of God. On this day, we honour and glorify our Panagia, our timeless and unshakable support, who strengthened, enlivened, comforted and protected the heroes of the 40’s era.

We also glorify the Triune God, Who has counted us worthy to celebrate our national anniversary in a country where its people came together with the Greeks in common values and ideals, and fought fiercely to defend them.

With all my heart, I wish “many years” to Greek people everywhere, covered by Panagia’s protection!