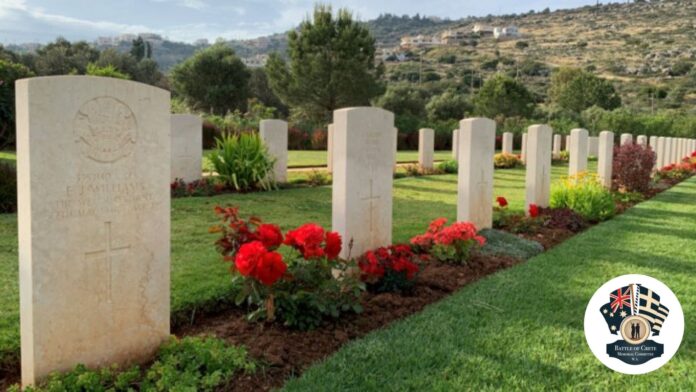 To mark the 80th Anniversary of the World War II battle, the Battle of Crete Memorial Committee (WA) (BCMC) will release its preferred design for a new memorial later this month.

The memorial, to be located within the Saw Avenue precinct at Perth’s King’s Park, will commemorate the courage, sacrifice and commitment of those who served and endured the battle. In particular, Australian service personnel with direct links to Western Australia and the people of Crete, who on so many occasions risked their lives to assist them.

In March 1941, the Australian 6th Division and the New Zealand 2nd Division were deployed from Egypt to mainland Greece to counter the threat of an invasion by Nazi Germany. When the invasion came, the Allied forces were hopelessly outnumbered and outgunned by a modern war machine with total control of the skies. Amongst the Australian forces was the 2nd/11th (City of Perth) Battalion, made up predominantly of Western Australians. By late April 1941, the Allied forces were forced to evacuate Greece, leaving all of their vehicles and most of their heavy weapons and communications equipment behind.

Some of the Australian forces were withdrawn to Egypt, whilst others were landed on the Greek island of Crete. Under the command of the New Zealand Major General Bernard Freyberg VC, the Allied forces reorganised themselves as best they could and prepared for an imminent German attack. That attack came on 20 May 1941 with the Germans employing massed paratroop drops, supported by constant air attacks, in four locations.

All locations saw heavy fighting, but at the end of the first day, the Australians, had the upper hand in their sector around the airfield at Rethymno. However, the tide soon turned and on 28 May 1941, General Freyberg issued an order for Allied forces to evacuate Crete. Unfortunately, the order did not reach the Australians at Rethymno and by 29 May 1941, they were all but trapped. Having run out of ammunition and food, Major Ray Sandover, the Commanding Officer of the 2nd/11th Battalion, gave his men the option of either surrendering, or escaping into the hills and then to attempt to make their way back to Egypt by whatever means.

With the cessation of the evacuation by the Royal Navy on 30 May 1941, thousands of Allied troops were captured. However, there were hundreds seeking to evade the enemy in the mountains. Many of these were sheltered and fed by poor Cretan families, this they did knowing that they would be executed if discovered doing so by the enemy. Eventually small groups of Allied personnel made their way to the south of the island. Of these, a number were sheltered by the Monks of Preveli Monastery, these included Major Sandover and over 50 members of his Battalion, who later managed to escape to Egypt.

Recollections of the story behind the memorial may have dimmed over time, but its significance for the people of Western Australia and Crete remains strong.

Mr Bill Evangel, the President of the Greek Australian RSL and chair of the BCMC said, “This story of heroism, on and off the battlefield, is a reminder to us all, that of the generosity of strangers should never be forgotten”.

The proposed memorial has received support from the Commonwealth and the WA State Governments as well as the RSL(WA). In principle support for the project has also been received from the King’s Park Board. Prominent WA artists Smith Sculptors have been chosen to develop the design. The BCMC has also partnered with the National Trust (WA) and has commenced fundraising to make this memorial a reality.

To launch the memorial concept, the BCMC will be hosting an unveiling of the design on Thursday 27th May in Perth.