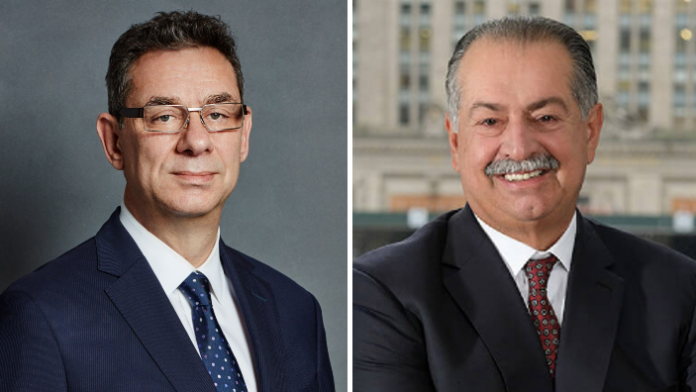 The Hellenic Initiative Australia (THI Australia) is holding a ‘In Conversation’ event with Dr Albert Bourla, Chairman and Chief Executive Officer of Pfizer, a global business leader and an outstanding member of the Greek diaspora.

Dr Bourla will be joined by Andrew N Liveris AO during the conversation.

In this milestone year for Greece, marking 200 years since the commencement of the Greek War of Independence, THI Australia is honoured to host such an event with two exceptional members of the Greek diaspora, who continue to support and promote Greece.

THI Australia is a not-for-profit organisation and part of a global movement, bringing together the Greek diaspora and Philhellenes in support of Greece and its people. A registered charity with DGR status, all donations are tax deductible in Australia.

To attend the event, registration is essential so you can receive a unique zoom link to log in to the webinar.

As Chairman and Chief Executive Officer, Albert Bourla leads Pfizer in its purpose: Breakthroughs that change patients’ lives, with a focus on driving the scientific and commercial innovation needed to have a transformational impact on human health.

During his more than 25 years at Pfizer, Albert has built a diverse and successful career, holding a number of senior global positions across a range of markets and disciplines. Prior to taking the reins as CEO in January 2019, Albert served as the Pfizer’s Chief Operating Officer (COO) beginning in January 2018, responsible for overseeing the Company’s commercial strategy, manufacturing, and global product development functions.

In addition, he created the Patient and Health Impact Group, dedicated to developing solutions for increasing patient access, demonstrating the value of Pfizer’s medicines, and ensuring broader business model innovation.

From January 2014 to January 2016, Albert served as Group President of Pfizer’s Global Vaccines, Oncology, and Consumer Healthcare business, where he was instrumental in building a strong and competitive position in Oncology and expanding the Company’s leadership in Vaccines.

Albert was President and General Manager of Pfizer’s Established Products business from 2010- 2013, leading the development and implementation of strategies and tactics related to Pfizer’s offpatent portfolio, (including legacy brands and generics).

He began his Pfizer career in 1993 in the Animal Health Division as Technical Director of Greece. He held positions of increasing responsibility within Animal Health across Europe, before moving to Pfizer’s New York Global Headquarters in 2001.

From there, Albert went on to assume a succession of leadership roles within the Animal Health Division, including US Group Marketing Director (2001-2004), Vice President of Business Development and New Products Marketing (2004-2006), and Area President of Animal Health Europe, Africa and the Middle East (2006-2009). In 2009, he assumed additional responsibilities for the Asia and Pacific regions.

Albert is a Doctor of Veterinary Medicine and holds a Ph.D. in the Biotechnology of Reproduction from the Veterinary School of Aristotle University. In 2020, he was ranked as America’s top CEO in the Pharmaceuticals sector by Institutional Investor magazine.

He is on the executive committee of The Partnership for New York City, a vice president of the International Federation of Pharmaceutical Manufacturers & Associations, a director on multiple boards – Pfizer, Inc., The Pfizer Foundation, PhRMA, and Catalyst – and a Trustee of the United States Council for International Business. In addition, Albert is a member of the Business Roundtable and the Business Council.

Andrew is the former Chairman and CEO of the Dow Chemical Company and former Executive Chairman of Dow DuPont.

Andrew was the Special Advisor to the Australian National COVID-19 Coordination Commission. He is Co-Chair of the Northern Territory Economic Reconstruction Commission, advising on how to accelerate the Territory’s economic rebound and growth. He is an Independent Member of the Australian Government’s Industry Growth Centres Advisory Committee.

Andrew is a Director at IBM, Saudi Aramco, Worley (Deputy Chairman), Lucid Motors (Chairman), NOVONIX and the Minderoo Foundation. He is on the advisory board of Sumitomo Mitsui Banking Corporation, Teneo (a global CEO consulting and advisory firm), and NEOM (an initiative driven by Saudi Vision 2030).

He is Chairman of the BlackRock Long Term Private Capital Fund and a Special Advisor to the Public Investment Fund (PIF) and the Crown Prince of Saudi Arabia. Andrew also serves as a Trustee for the King Abdullah University of Science and Technology (KAUST) and is a member of the Concordia Leadership Council.

In 2018, the Andrew N Liveris Academy for Innovation and Leadership was established at the University of Queensland for students to garner a real-life understanding of the global challenges and how to create positive change for society.