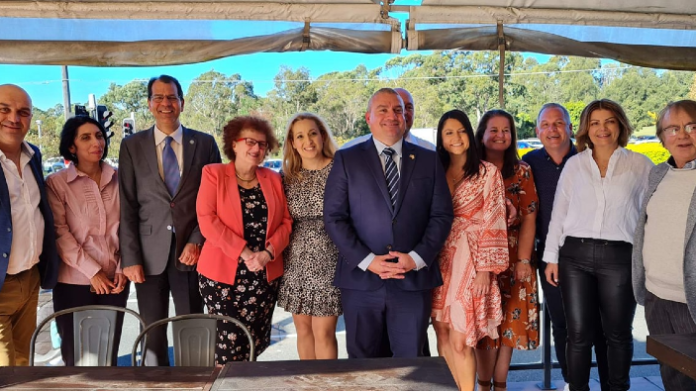 The Antissian Association of New South Wales held a special Mother’s Day luncheon at Yiamas Greek Taverna in St Peters, Sydney, on Sunday in the presence of a number of Greek community leaders.

Ambassador of Greece to Australia, George Papacostas, along with the High Commissioner of Cyprus in Australia, Martha Mavrommatis, arrived from Canberra to attend the luncheon. It was Mr Papacostas’ first time in Sydney.

A number of speeches were given during the luncheon, which was attended by about 100 people including, but not limited to, the President of the Greek Orthodox Community & Church of Canberra, John Loukadellis, and the President of the Mytilenian Brotherhood of Sydney & NSW, Peter Psomas.

Co-President of the Antissian Association of NSW, Maria Iatrou, spoke first and welcomed everyone to the event, before introducing Mr Papacostas to say a few words.

In his speech, the Ambassador thanked everyone for welcoming him to his first-ever event in Sydney and went on to speak about his love of the Greek island of Lesvos.

For her part, Ms Mavrommatis congratulated all the mothers and grandmothers in the audience for their hard work and dedication to their families, before giving her own personal story of Mother’s Day on May 9 where she was given a huge bouquet of flowers from Mr Loukadellis, as she spent the day separated from her husband and children.

“That is the Greek philotimo!” Ms Mavrommatis said to wild applause.

After the official proceedings, attendees enjoyed a Greek feast as Tassos Bouzouki played his well-known Greek tunes in the background.