Australian made, Greek inspired: Mitchell Smilovitis on the new spirit he makes in WA 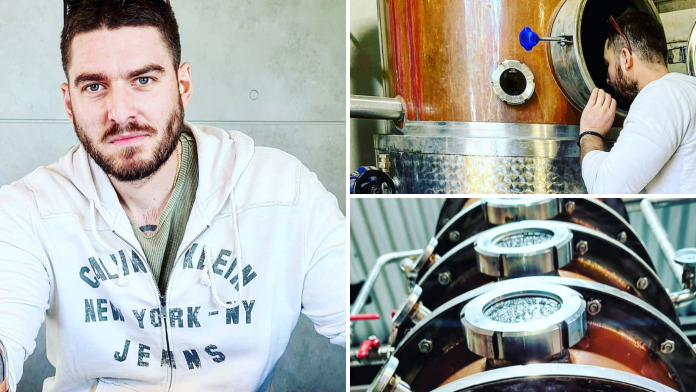 In this day and age, it truly is a difficult concept to stand behind, especially for those who are in the food and beverage industries. With so many processed goods, there are many who opt for the easy way out by simply choosing the more affordable materials that allow them to not only slash production costs, but also get their product out to the market faster. Yet, sticking to your guns may be equally as rewarding, as proven by the vodka Smilov and its creator Mitchell Smilovitis.

Born into a family of Greeks who were always willing to get their hands dirty and work with the land, Mr Smilovitis was taught from a young age to never cut corners. Speaking to The Greek Herald, the entrepreneur explains with a great sense of pride how his forefathers first migrated to Australia and how they were able to not only survive, but thrive through this hands-on way of life.

From Florina to Fremantle

“Both my yiayias (grandmothers) were from Florina and they migrated back in 1955 to Fremantle, in Western Australia. While in Greece, agriculture was a big part of their lives, but my great-great-grandfather was a stonemason, so we were also involved in building. Once they moved to Australia, my grandfather and his brother, they got into the tobacco business, then they moved on to farming and the seafood industry,” says Mr Smilovitis.

“They would just live off the land and then they’d slowly begin to grow that into a business opportunity, beyond just the sustainability part of simply feeding themselves. For example, they started fishing for themselves and then it grew into opportunity turf, a seafood business. Same with the tobacco and all the other produce that they would grow. Always using their hands, that’s the main take from all this.

“I think that attitude was passed down to the next generations. That no matter what you’re doing, you need to understand the process. Don’t trust someone else, you learn the process, teach yourself so that when it comes time to talk about a product, you know what you’re doing,” he says.

Mr Smilovitis then goes on to explain how that way of thinking of truly applying yourself to your work and being authentic and as close to the land as can be is applied to his latest creation, the Smilov Spirits vodka.

“First of all, keeping everything within WA was a big focus of the branding as well as the product, particularly because we’re all in the same region, my family and me, for four generations now. So we’re trying to maintain the heritage aspect as well by using locally sourced raw materials. That was the first point, which is what narrowed us down to using wheat to create the vodka.”

“Wheat is quite common here so we were able to source it locally, as well as keep that production line, not just from the ingredient perspective but also from the ability to manufacture and procure it. Due to Covid-19 it became very challenging to get things in from Melbourne, Sydney and other areas where a lot of distilleries provide us with fresh produce.

“Using authentic river water was another key benefit of the manufacturing process. So we have the wheat and the water from the same region and we don’t add anything else to the way we make it, which is why it’s very consistent in the smoothness of it but there’s no afterburn,” explains the Greek Australian vodka creator.

Asked about the distilling process, Mr Smilovitis says that they only use charcoal filtering and traditional methods.

“It’s all very old-school, even though we were able to utilize our large capacities because we had a very big still. It’s mainly us using traditional methods and very good quality local ingredients. The wheat has to be winter wheat and it’s dried in the summer sun which gives it a unique blend with the flavouring but also the quality of the other products,” he says.

“Also everything else such as outsourced ethanols, is from within Australia. From the bottles and labels to the hardware everything is 100% Australian, which is what we wanted.”

Concluding, the business owner explains who he has in mind as the intended target audience for this latest blend.

“We’re not an Australian distillery that uses chemicals. We see ourselves as a very good quality vodka. A lot of our marketing, is based around our food lifestyle and we always have tips about Greek food. We’re very big on that home consumption, gatherings and celebrations because that’s how we grew up.

“I’ve got three boys, we love cooking, our weekends are all about how much we can eat and trying different foods and drinks. So that’s the way we see our brand. Hands on!”