In Photos: The commemoration of the Dormition of the Theotokos in Australia and Greece 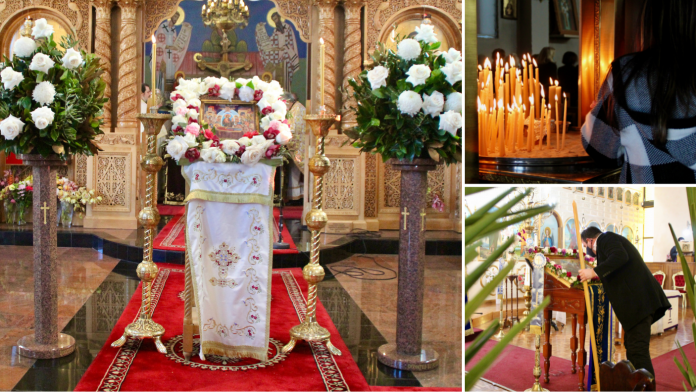 The Dormition of the Theotokos is a Greek Orthodox celebration held every year on August 15. Due to the current COVID-19 lockdowns in New South Wales, Victoria and Canberra, parishioners were unable to attend church services and instead, watched them from their homes via live streams.

But in South Australia, Western Australia, Tasmania and Queensland, the faithful were able to gather and commemorate the important day.

His Eminence Archbishop Makarios of Australia also issued a message to mark the religious day, calling on Orthodox Christians “to be an example through their faith; to not be discouraged, to not lose heart, and to not lose hope,” during the current COVID-19 pandemic.

“Panagia always was, and will always be, our unshakeable support. Let us turn to her again today, intensifying our prayers so that we may gain consolation, hope and strength to effectively deal with the current tribulation,” His Eminence wrote in his message.

“I am certain that your prayers to our Most Holy Theotokos will also include our brethren in Greece, who have been severely affected by the devastating fires these last days.”

Of course, Greece also marked the occasion and in Turkey, the Ecumenical Patriarch officiated at the Liturgy at Soumela Monastery.

Here’s our rundown of how the Dormition of the Theotokos was celebrated in Australia and Greece.

With masks on and under COVID-19 safety rules Greeks across South Australia gathered to commemorate one of the holiest dates in the Orthodox Christian calendar.

The Greek Orthodox Community of WA Inc celebrated the Vespers of the Dormition of the Theotokos at the Parish of Evangelismos, West Perth.

The service was presided over by His Grace Bishop Elpidios of Kyanea and involved the recital of lamentations of the Virgin Mary. Seven girls also performed the role of ‘myrophores’ or flowergirls and attended to the epitaphio.

Over 100 people attended a Matins and Divine Liturgy from 8.30am on Sunday at St Georges Greek Orthodox Church in Hobart. The church service was presided over by parish priest, Father Panagiotis, who was also celebrating his nameday.

After the church service, souvlakia and Greek sweets, made by the Greek womens philoptochos, were available for purchase. All proceeds from the sales will be donated to the people in need after the recent fires in Greece.

The Vespers and Divine Liturgy services in honour of the Virgin Mary were both held at St George Greek Orthodox Church in South Brisbane. The services were presided over by parish priest, Father Dimitri Tsakas, and over 100 people were in attendance.

Faithful from across Greece attended church services to celebrate the Dormition of the Theotokos, adhering to COVID-19 safety protocols. The Archbishop of Greece presided over a service at the Church of the Assumption of the Virgin Mary in Tavros, while the Prime Minister of Greece, Kyriakos Mitsotakis, attended a service at the Church of Panagia Vourliotissa in Nea Filadelfeia, Athens.

In Tinos, a traditional procession of the icon of the Virgin Mary was not held this year in order to protect the faithful, according to ertnews.gr.

In Turkey, Ecumenical Patriarch Bartholomew officiated at the Divine Liturgy at the monastery of Panagia Soumela in Trabzon, Turkey.

It is the first time, after six years of forced silence, that the Liturgy for the Feast of the Assumption of the Virgin Mary is taking place, due to the restoration works of the monastery.