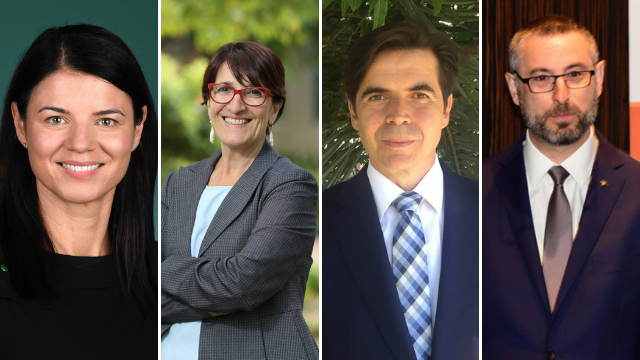 The tension in the Eastern Mediterranean, next Year’s 200th anniversary of the beginning of the Greek Revolution and the way Greece has tackled the coronavirus pandemic were some of the issues discussed in a recent online meeting between Chair and Deputy Chair of the Australia-Greece Parliamentary Friendship Group Dr Fiona Martin and Ms Maria Vamvakinou respectively, the Consul General of Greece in Australia Mr Christos Karras as well as the Australian Ambassador in Greece Mr Arthur Spyrou.

“We discussed bilateral issues concerning Greece and the Greek Diaspora in Australia. It was a very good, informative and constructive conversation that will strengthen our efforts to build on the Greek Australian relationship,” Dr Fiona Martin, told The Greek Herald referring to her Greek background.

“There is a number of federal employees in parliament with Greek heritage like Michael McCormack and Alex Hawke and of course, my paternal grandparents were from the island of Kastellorizo . My full name is Fiona Barbouttis – Martin and in Greek I’m known as Fotini”.

Dr Fiona Martin, Liberal federal member for the Sydney seat of Reid is the daughter of veteran Panhellenic (now Sydney Olympic) football player George Barbouttis and granddaughter of Markos Barbouttis, who had immigrated to Australia from Kastellorizo ​​before World War II.

“Being the member for Reid is like traveling around the world in one day. We have migrant communities from China, Korea, India, Italy, Greece, Lebanon and so many more, and the diversity of our people is visible in our streets. I have great admiration for those who, like my grandparents, uprooted their lives to make a go of it in this lucky country,” Martin said almost a year ago, at her first Parliament speech.

“I think Australian Greeks have contributed significantly to Australian society and culture and this should be recognised”.

Speaking to The Greek Herald, Ms Vamvakinou, the Parliamentary Friendship Group’s Deputy Chair and Labor Federal Member for the Melbourne seat of Calwell, explained that Australia and Greece have always shared a “good and active relationship” and the purpose of the Group is to strengthen them further.

Ms Vamvakinou, the first Greek-born woman to be elected to the Parliament of Australia, has been a long advocate for Australia-Greece bilateral relations and has served as the Parliamentary Friendship Group’s Chair and Deputy Chair in previous parliaments.

“We have many federal MPs who have Greek-speaking communities in their electorates. For these MPs, this group is important so they can be in contact with the issues that concern their voters, ” said Ms Vamvakinou.

“We are all looking forward to the celebration of the Anniversary of the Greek War for Independence. We discussed the importance of this Anniversary for the Greek Diaspora and the way we can celebrate here with the same splendour that will be celebrated in Greece.

“We hope to hold an event in Parliament, in the presence of the Prime Minister, the Leader of the Opposition and other MPs,” Vamvakinou said, expressing the belief that “the Greek Church under the leadership of Archbishop Makarios will play an instrumental role in the preservation of the Greek language and culture especially for Greek-Australians third and fourth generation”.