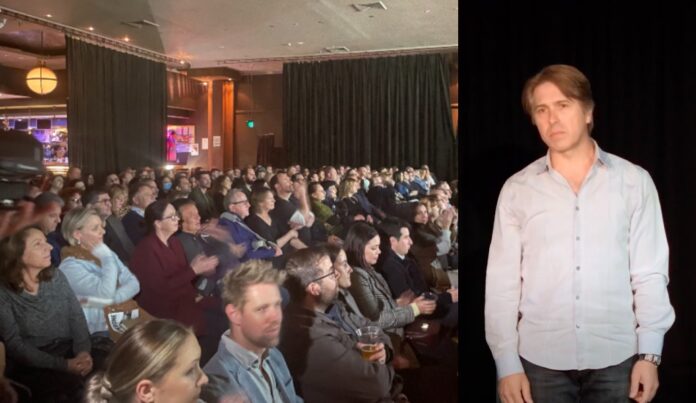 The following contains NO spoilers about the play.

Alex Lykos’ one man show, Jawbone, went off without a hitch at it’s premiere at the Factory Theatre in Marrickville on Wednesday night.

The one man show was promoted as a provocative, bold, and controversial dark comedy which examines the mythology of the modern day “successful man.” One thing is for sure, it delivered on this promise.

Jawbone revolutionises the idea of the word ‘success’. Without revealing too much about the show, the main character, Tim, is constantly overshadowed by his brother and external adversaries. Facing whirlwind feelings of depression, he’s then hit hardest by an expected family death.

Spinning him into a solemn cycle, the play explores Tim’s path as he finally stands up to his more “successful” married brother, quits his job, gambles, drinks, explores his sexuality and finds love.

The play was certainly provocative, but expertly laid out the expectations of a man in the 21st century, and what can happen if these expectations are failed to be reached.

Lykos spoke to The Greek Herald before the play’s premiere to reveal his inspiration.

“Someone actually told me the success of a man is measured by the number of square metres he owns and the number of kids he has. This person’s definition of success I guess haunted me in many ways. In a city like Sydney, if you don’t have money, you can easily feel like a complete failure,” Lykos said to The Greek Herald previously.

“So telling a story from the perspective of someone who is essentially a failure and is now in a position where he has nothing to lose, opened the story up.

“I want the audience to laugh, cry, feel and perhaps stimulate discussion about the serious themes that are being examined.”

The play doubled as the 15 year anniversary of Marrickville Theatre Company with a gala opening night on the 26th of May, celebrating 15 years of independent modern Australian storytelling.

Prior to Lykos’ performance, a video was shown to showcase the incredible 15 year history of the theatre and Alex’s performances. Major sponsors were also presented with a gift as acknowledgement for their longstanding contribution.