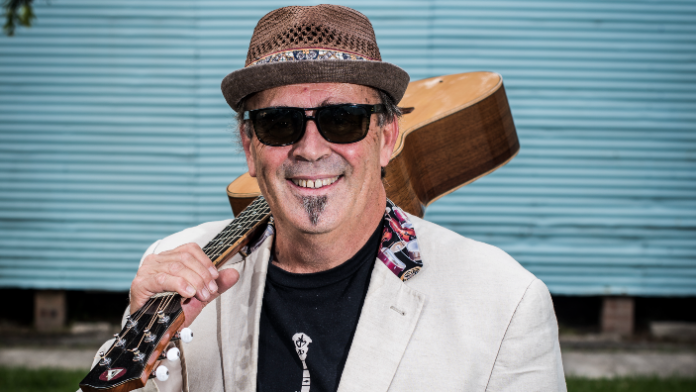 When we sit down with George Doukas for an interview following his amazing live music performance on The Greek Herald’s Facebook page, he describes himself as “on the good side of sixty,” with a previous career in senior management in the corporate sector. Now though, he’s a musician with “some handyman work” in between.

To find out more about this charismatic character, we ask Doukas about his musical career and plans for his future.

I was born in Australia. My parents were from a region called Zarakas, Lakonia. My upbringing was fairly strict which was common for all migrant kids back then.  It’s just how it was and we accepted it as we didn’t know any better. But we still had lots of fun growing up. Playing outside till dark, billy carts, sling shots, etc.

My high school education was at Homebush Boys High and then Wollongong University and Macquarie University. I deferred in the early eighties but went back and completed my degree in Arts fifteen years later with a major in Psychology.

2. When did you first start playing the guitar and singing?

My first instrument was actually the bouzouki. I joined my first band at 18 – your typical Greek band in an era when there were dances every week or weddings and it was a great learning experience.

However, after transferring to Macquarie Uni and coming back to Sydney, it became difficult to continue with Atlantis due to travel required for rehearsals and gigs. At this time, I was fortunate enough to play a couple of concerts with the wonderful Themos Mexis and was part of his band at Le Beach Hut restaurant for a couple of years.

The thing that inspired me the most was in my early teenage years at a Greek dance, listening to the band and the sound of the bouzouki and marvelling at the effect it had. That particular event had a special guest for the evening – Loukas Daralas, the father of George Dalaras.  It was his performance and the way the audience reacted to him that inspired me to have a few lessons and to start playing.

3. You also have a band called George Doukas and the D Strings. How did this come about?

The D Strings came about because I always try to do something that hasn’t been done before. I’ve always liked doing my own thing musically and resist the temptation to follow trends. I started doing my own shows and released a little CD back in 2000. I put a band together playing a kind of alternative Greek music as well as original pieces.

After that I formed a band called Balkano, which was a fusion of Greek and Eastern European music. From there I put together a Rembetiko ensemble which also had a good run for a couple of years.

Then I was asked to play another show at Camelot Lounge and I thought about doing something totally radical. Incorporating a string quartet with Greek music. I booked the show! I didn’t have the string quartet or the repertoire, but I booked the show anyway. And so began the frantic search to find players who were as crazy as me, and the even more frantic effort of preparing a repertoire.

Both were achieved and the first two shows were pretty low key – strings, bass, piano and myself. I realised this concept had appeal so the next step was to have bouzouki and percussion and now the band has two bouzoukia, a female vocalist, percussion, bass and strings. Whilst primarily Greek, I am trying to position the band as a world music ensemble, so we play some Mexican, African and Balkan music, as well as Rembetika and Greek folk.

We have performed several times at Camelot Lounge as well as Melbourne, The Factory theatre, The Enmore Theatre. We were asked to play in Perth at the end of this month doing a tribute show to Manos Loizos but COVID put a stop to that. Hopefully we can re-schedule that show for next year.

The band has a mini CD called Synnergies which basically showcases our Greek repertoire. This is also on various platforms such as iTunes, Spotify etc.  And we also have a couple of songs on Triple J Unearthed.

4. Do you have any musical highlights which made an impact on you?

Where do I start? I have many highlights.

I really need to mention that working with Themos Mexis had an impact on me. Both at the concerts and with his band. Being primarily self taught, it was very daunting playing with that level of musician(s). However, I am very grateful for the time I spent with Themos and his patience and effort in helping me. Without that experience, I wouldn’t be who I am today.

Another key part of that band was Christopher Soulos who was, and still is, an amazing musician and also had a big influence on my development as a musician. I was also very fortunate to have worked with the late Kosta Theofanopoulo who I considered to be a mentor. This man had worked with some major names in Greece back in the day and he was gracious enough to show me and teach me stuff that helped me enormously.

Finally, my performances and association with the Greek Festival of Sydney have had the most profound impact on me. In particular, working with conductor George Ellis in putting together major concerts for the community. This has led to me working with the likes of Vasilis Lekkas and Dimitri Basis. With Dimitri, I have done two national tours playing both symphonic concerts as well as his live shows. One of the real highlights of my association with Basis and the Greek Festival were our performances with the Newtown Performing Arts High school.

5. What do you love the most about playing the guitar and singing?

It’s fun. I also love the freedom to express myself and being able to play with some great musicians and characters.

6. What would you say to someone else who wants to start playing the guitar?

Always try to surround yourself with players who are better than you, for that’s how you will learn. Don’t be afraid to take artistic risks.

When you’re in the scene, be reliable. Always turn up for rehearsals. Don’t be late to gigs and be contactable. Doesn’t matter how good you are, if you are difficult to work with and unreliable, you will often be overlooked.

Finally, be true to yourself. When the enjoyment stops, get out for a while. There will come a time when you need to take a break. If you are not enjoying what you do, how can you expect the audience to enjoy what you are doing.

I would really like to thank all the people who take the time to support live music. This includes audiences, media, promoters and organisers. I would also like to acknowledge all the other musicians and performers out there without whom we wouldn’t have a scene at all.