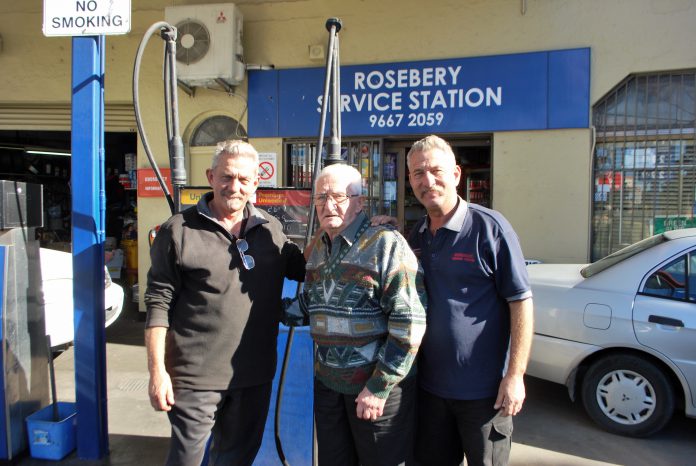 The longevity of a shop/business undoubtedly builds strong relationships with the community; as customers, we love the familiarity of knowing that businesses and shops are still open and at the places we remember. Additionally, we appreciate and admire when shops/businesses have a couple of generations of family members working in it. Maybe, it is that comforting thought that we know they will continue to be there for us.

As a city, Sydney is dramatically changing with its constant development and Gardeners Road- St Peters to Kingsford- is no exception. Yet, one of the architectural landmarks along Gardeners Road is definitely Rosebery Service Station which was bought by Michael Carayannis in 1974 and is now run by his sons, Pandelis and Giorgos.

Having finished his schooling at the Greek Patriarchate School in Cairo, Egypt, Michael’s dream was to become an electrician; after his apprenticeship, he got a job, as an electrician, at the textile factory, Castro, which was run by a Jewish family. His dream was always to open his own business, so he did when he established a bike workshop that repaired and serviced motorbikes and bicycles.

With the deteriorating political situation in Egypt in the mid 1950s, Michael and his wife, Mirella, and their baby son, Pandeli, migrated to Australia in 1957. After working 17 years as an electrician at British Motor Company at Zetland- with a short stint at Garden Island- he was inspired to set up his own business in Sydney too.

So, in 1974, an opportunity arose to buy the Rosebery Service Station. At the time, most of Michael’s customers were Australian but he remembers more and more Greeks were moving into the area as there were so many work opportunities in factories in Rosebery and nearby suburbs such as Alexandria, Mascot and Botany. Michael believes the business grew because “our customers trusted me as a mechanic, and my work. Customers would drop off the car in the morning and picked it up in the afternoon.”

In 1977, his son, Giorgos, began his apprenticeship with Michael; the following year, Pandelis- who had also worked at BMC- joined him too. Until recently, when Michael retired, they had been working together for almost 40 years! As Michael says, “Could I ask for anything more than having my sons in the family business?”
Asked why they make such a great team, Pandelis and Giorgos, explain, “As brothers, we have worked together for almost forty years and we have succeeded because: we have the right chemistry within a family business; the love and respect for our father; our father’s work ethics have been passed down to us; and we have a mutual respect for each other.”

Over the years, a lot of interest of interest has been shown on the business and Carayannis family. Asking Pandeli and Giorgo about the reasons for this interest, they agree it is a combination of the business’ longevity, it is a family business and the building’s distinct architecture; to emphasise family values, the Carayannis family were featured in the Glenn Finney’s commercial for the 40th anniversary scotch whiskey, and they were also featured as a family business on Channel Seven’s Sunrise program and in the Sydney Morning Herald. With the building’s distinct architecture, a commercial for Solo soft drink was filmed there too. Pandeli and Giorgo also allow university students in film studies to use the service station for their practicals.

After forty five years working in Rosebery, both Pandeli and Giorgo believe it is their special bond that has kept them together all these years, “We all started working with our father when we were young and have grown old together. It has been very special to have had one another.”

And it is such strong and sincere family values that are projected onto others that is reciprocated by customers and the community who continue to drive into Rosebery Service Station, and are looked by the Carayannis family after all these decades