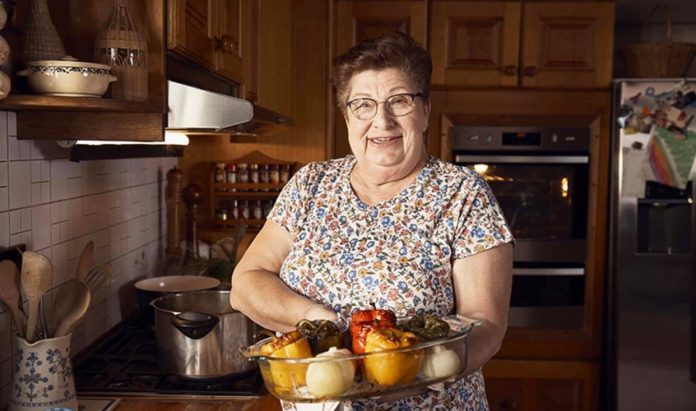 One would recognise her from AGL’s latest TV campaign or YiaYia’s Greek Kitchen page on social media. But Helen Dedes, now 72, does not consider herself a celebrity. She is the YiaYia next door, just with abundant humour and positive energy.

“I love cooking. I don’t think I remember one day without cooking,” she says in the AGL advertisement.

Cooking and family are the two things she has kept close to her heart, all the way from her home country to the other side of the globe.

“My mother inspired my love of food,” says Dedes, who migrated to Australia from the island of Lesvos, in 1967 with her husband, Stavro.

“We came to Australia for a better life. To find the pot of gold. My husband was the one who wanted to come. I wanted to stay in Greece and study. I was aspiring to become a fitness instructor, but we loved each other so I followed him,” she tells The Greek Herald.

“The first years were hard. We didn’t have money and my husband had to learn the language. He was a police officer in Greece, but here he had to do different jobs to provide for us,” Mrs Dedes says. In the meantime, she started singing.

I ask if they ended up finding this pot of gold and how soon they felt Australia home. ‘Όπου γης και πατρίς’ she says in Greek, meaning that ‘Home is where the heart is.’

With her positive attitude towards life, her resilience and the belief that there is a solution to every problem, Helen Dedes and her late husband, set the foundations for one of Sydney’s most renowned restaurant chains, the Dedes Waterfront Group.

A few years ago, she retired and handed over the reins of the Dedes Group to her son, Con. “That was my proudest moment. Family is everything to us. I’m just so happy to see him taking on my passion for food and making people smile and be happy.”

But what motivates her and where does she draw her energy from?

I ask her to convey her message to the future generation of Greek Australians, through The Greek Herald, as she has been reading the paper for more than 20 years.

“Know yourself and preserve our Greek traditions and culture,” she says and continues, “grandparents, talk to your grandchildren. Help them think positive, work hard and love whatever they decide to do in life,” she says affectionately.