TGH Exclusive: Sophie Cotsis on International Women’s Day, “I have a responsibility to talk about my illness” 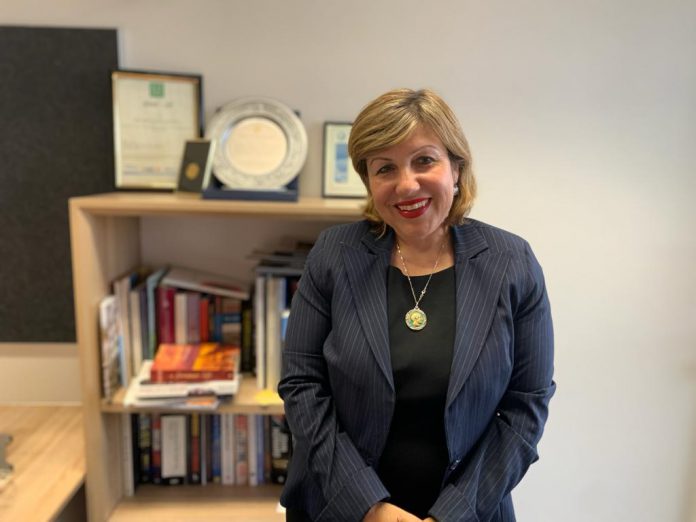 When Sophie Cotsis was growing up, she had the upbringing many migrant children are familiar with; translating bills for their parents, helping them with directions and writing letters on their behalf. It wasn’t until much later on in her life that she realised this upbringing was the exception in Australian society.

“Learning English and just reading and writing was such a barrier, and such adversity for new migrants in the 50s and 60s. I think that drove me in being an advocate…for a lot of us we grew up like that and that’s what drove us,” explains Sophie.

Sophie Cotsis spoke exclusively to The Greek Herald, ahead of International Women’s Day, to share her journey throughout politics, her motivation for advocacy, and in one of her first interviews, she boldly and heart-fully discusses her personal battle with breast cancer.

The pathway to Parliament

Sophie considers her first step into political advocacy when she joined the union while working a the airport, during her university days.

“There were women who, like my mum, couldn’t speak very good English and I was like their advocate…They were getting ripped off so we organised a campaign. That kind of got me more motivated to get involved,” explains Sophie.

When it came to choosing a political party, she was naturally inclined to follow the leadership values of Labor leaders like Gough Whitlam, who provided anti-discrimination rights to ethnic communities and promoted multiculturalism, as well as Paul Keating, who pushed superannuation for low-income workers.

Sophie’s biggest political priorities come under the umbrella of health, education and economic growth. She brings a very real element of humanity to her political campaigns, where she says she feels a responsibility to talk about the areas of her life that drive her, in order to engage with her community further to represent their needs.

Health advocacy and her battle with cancer

Sophie has a big vision for the Canterbury Health precinct and the rebuild of Canterbury Hospital, which hasn’t been rebuilt since 1998 and has an increasing population.

Canterbury also has an increasing multicultural community, which brings rare health needs along with it, which she says the hospital development needs to respond to.

In addition, Sophie’s advocacy for health kicked into a higher gear when, sadly, she was diagnosed with breast cancer in 2018.

Sophie describes the experience as one “massive shock”, and says she was “devastated” when she received her diagnosis. She says she was mostly shaken by the unknowns.

Sophie says a difficult part of treatment was the process of letting go and allowing herself to accept, and appreciate, the help she was offered.

“We have this thing, we all have it, we don’t want to be seen as victims. For a short period of time we have to go through a process when we’re very ill and we have to get better. For me…I’m very, ‘I can do it myself’, it’s our Greek spirit,” explains Sophie.

“But we’re also hospitable and reaching out and so I just stopped trying to control everything and just accept the help. Accept that people that care about you are going to come to your house and give you a plate of food, and they’re going to fold your washing, and yes, we’ve got our families and they’re there to help us.”

Sophie says that the love and support she received throughout this time gave her a better perspective in life, and a greater appreciation for Australian society and the multicultural values ingrained in it.

“Australian society is very family, community orientated. We help our neighbour. We have that mateship…Greeks have filotimo, Australians have mateship. It’s similar in a way,” says Sophie.

She noted how strongly she valued the support form the community, community leaders, Greek community and others who supported her to get better, and continued to support her politically, while she was recovering.

Sophie initially tried to keep her illness out of the public eye, as she explains, “initially it was very difficult to talk about because it was an emotional time.”

Though, she realised later she “had a responsibility to talk about [her] illness and what she went through”, after a number of people in the community shared that they went to for breast cancer screenings after hearing about her diagnosis. “That was good for me, that I could inform people that way,” she said.

Sophie is now driven to use her unique position to act as an advocate for breast cancer awareness and screening.

“I would say to women, get checked. It’s scary and it’s tough, but if you’re ignoring these things, it’s not good. The earlier you get screened, the better,” she said.

Sophie was diagnosed with breast cancer through her routine breast cancer screening. “I got a breast screen and mammogram. I haven’t reached 50, but even for women over 40, they should go see their doctors, have a discussion and they should get screened. Absolutely.”

“I’m very lucky that we live in Australia and I’ve been treated by amazing doctors. We owe our doctors, researchers and scientists a debt of gratitude. Especially our researchers, they have done such good work that the advancement of treatments to help people survive those first 5 years is phenomenal.”

Sophie says that this experience has given her more “clarity, a better perspective on life, and to appreciate life better”.

“I thought I did appreciate life but you don’t appreciate it until you go through something devastating like this,” she said. She insists that living a healthy life, going for walks, making time for family and friends, and generally appreciating life more is a positive that is birthed from life’s tragedies.

Ultimately, Sophie’s final message to women, and all people going through cancer, or who know someone with cancer is:

“The message is, screening. And that cancer shouldn’t be a taboo. We need to look after people who are going through a tough time. If we do know people going through cancer, reach out.”