TGH Exclusive: Author of ‘The First Third’ Will Kostakis reveals the positive impact of his yiayia on his work 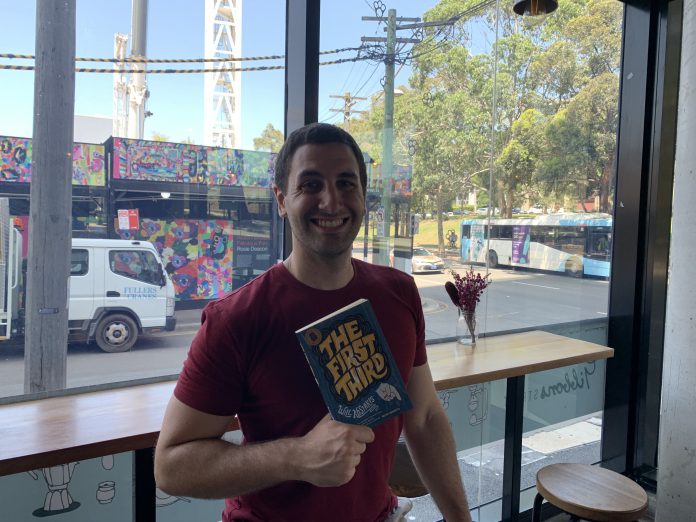 The Greek Herald sat down with author Will Kostakis to talk about his recent book Monuments, influences when writing The First Third and how his yiayia has impacted his current and future works.

Which one of your novels would you say has been your favourite?

It changes every time, but I think The Sidekicks is my best book and it’s the one I’m most proud of. But I started writing The First Third thinking, ‘okay my first book flopped, I need to put all I can into this book’ and I really looked at my identity and I got to write about all the funny stories that I tell kids when I tour Australia about my grandmother. I was like I’m going to put them in a book, and it’s really wonderful where I can read from it and she fills up the room and I carry her with me everywhere. So, I feel like The First Third will always be my favourite for that reason, because yiayia walks around Kogarah telling everybody that it’s her life story.

A couple of years ago, she came to see me speak at Sydney Writers Festival, and so I snuck her in, and she sat In the audience. I gave the talk and a kid put up their hand, it was an auditorium of about 800 people, and he said, “oh do you have any other stories about your grandmother.” And I said well I probably shouldn’t tell you anymore, but I’ve actually brought someone with me today, and yiayia stands up and does the queen Elizabeth wave to everyone and everyone cheered. Later on, she came to sit with me while I was signing, and she brought with her some kourabiedes that she snuck in, and a kid hands her my book and goes can you sign it? And so, she had the biggest signing queue of Sydney Writers Festival. To be able to share the whole experience with her, and for my illiterate grandmother to be signing books at the Sydney Writers Festival, that experience is one in a million.

The First Third talks about a Greek Australian teenage boy, growing up and his life experience, what were some of your influences when writing the book?

I was in my early 20’s and I was starting to see my family, we were a close nit family growing up, but in your early 20’s we were starting to sort of separate and go our own ways and yiayia is like “oh no the family the family”. Families aren’t how they were for her generation or my mum’s generation, your closest friends were your cousins because you were the only ones that understood each other, so I wanted to write a book where my grandmother gave a fictional version of me, her bucket list to complete. But an inappropriate Greek grandmother bucket list, things like find your single mother a husband, un-gay your older brother, make your younger brother not a twerp. Sort of yiayia’s always out to fix everyone and I thought that was a really funny and interesting way to explore the way that grandmothers see themselves as the glue that holds the family together. And it will be very different when she does unfortunately pass away in the future, it’s not going to be the same, there’s going to be more excuses to not celebrate name days. And something is going to die with her generation, that sort of old-school Greek that came over after world war 2 and hasn’t changed at all. So, I wanted to explore, not only fearing the loss of someone that is inevitable but also losing what she represents. There’s going to be a gap in our culture and we have to do our best to preserve it, but also move forwards in ways they necessarily didn’t.

Why do you think The First Third resonated so well with the younger generation?

It helped that it was a funny character, it helped that it was heightened and the main humour in the story came from embarrassment and when you’re in your teens, that is what your feeling most of the time. Your feeling embarrassed by your older family. I think that struck a chord with a lot of teenagers. It struck a chord with Greek teenagers because you saw your life reflected back at you and that’s really powerful. We shouldn’t keep saying it’s rare for us to see those stories, but it still is. For example, the height of Greek representation on Australian television was Acropolis Now. And we haven’t had anything since, we have a couple of books every now and then. And so, my book came out when we hadn’t had one of those books in a few years.

The other thing is, while we find ourselves funny, Greeks laughing at Greeks is the funniest thing ever, whiter Australians like laughing at Greeks as well and there’s this weird discomfort about it, where I can make a joke about my grandmother and laugh about it and other Greek kids can laugh about it because they think “oh that’s like my yiayia too.” But then you have white people going saying “oh she’s so zany and Greek,” so it makes you feel uncomfortable. But I think there is something universal. In that novel I centred love I centred a bit of familial affection and its either something that people have lost or something that they yearned for or something that they had. And I think that’s what keeps the novel in the public conscious, even today it’s still being read and still being shared.

After writing your book, what do you think makes growing up Greek in Australia special?

I can only speak for myself and for my culture but for me it’s that family and it’s also that Greek guilt that we get hammered into and that’s what trains us and makes into good people and we think of others and it’s that sense of community.

We need to go back to yiayia in Redfern who’s just moved here, doesn’t speak a word of English but if someone knocks on her door and says hey I’m hungry, she will feed them. It’s just that generosity and spirit that we’re taught when we’re very young. So, I think that’s what makes our culture particularly special. I mean there are a ludicrous amount of things about our culture that I would love for us to update. Like I’m currently dealing with my yiayia who is a diabetic but is constantly arguing saying no I have to diet for church or else I’ll go to hell. But I think there are positive things to take from our culture just as there are positive things to take from any culture.

How did you get into writing novels?

It was again down to that Greek family, I had mum who didn’t really apply herself at school so when we were growing up, she had a book in my hand every single day. And I used to scribble in an exercise book all day and my grandfather saw how happy it would make me so he would go to the news-agency and come back with pens and exercise books and he would sit me down and tell me to write because he couldn’t read and write. In the same way mum wanted us to have something she didn’t have, he wanted us to have something he didn’t have. And so, my brothers and I were the first to go to university and that was something they really wanted. They knew how difficult it was to not be able to read and write or even speak proper Greek because they didn’t go to school because of WWII and they didn’t want that to repeat. So that was the start of it then I was lucky to have teachers at school that identified that sort of passion and guided me. And it isn’t a Greek origin story without a deadbeat dad. But I thought that’s fine, I’m going to write a book and support my family. Didn’t exactly go to plan, sent books to publishers and it wasn’t until year 12 that I got a book deal. So, I can see how my culture and the way I grew up is the way I am today. Because they wanted something that they didn’t have.

You recently write a book called monuments; can you tell me about it?

So I was about 10 years into my career and I thought to myself ‘I’ve written a lot of identity books’, which are really great because I get to write about myself, whether it be my ethnicity or my sexuality and I can put that on the page and work through it. But the big problem with those types of books is, if you centre identity, the problem of the story comes from the identity itself, so I was always looking at those parts of myself and thinking okay, what’s wrong with me, how would I deal with that and how would I come to terms with that and I could see myself falling into a pattern.

While I love the books that I have written, I don’t just want to write about interrogating my identity. Why can’t the gay Greek kid go on an adventure and save the world. Especially when we write about ethnic diversity, why do we always write about how quirky our families are and how we feel kind of trapped in our identities and all of that sort of stuff. So I just wanted to write a story where it was the sort of story I would’ve loved to read as a kid, and sort of expands on the kinds of stories that I can write, inspired by my ethnicity. And there are still a lot of personal stuff in there. There are things about that sort of grief that you have after a grandparent passes away or they’re sick, inspired by my personal experience is in there. But to write a story that trended towards hope and was a bit more fun and lighter.

Would you say it was easier or more difficult?

It was definitely more difficult because I usually write realistic fiction, when writing fantasy novels, you have to start from scratch. You have to think what makes a fantasy novel tick, you have to really interrogate it and understand it and it was like starting from square one again, re-learning everything. It was a fun experience, it was a challenging experience and now that I’m wrapping up work on the sequel I’m thinking how I never want to do that again.

Do you have any other projects your working on?

I want to do a version of The First Third but not the same plot just the same mood but for younger readers, so a more primary school version. There are a lot of books in that nature that I want to write. But it’s kind of cursed, once you talk about a book you want to write, you don’t end up writing it. I made that mistake with my second book; it was never released.