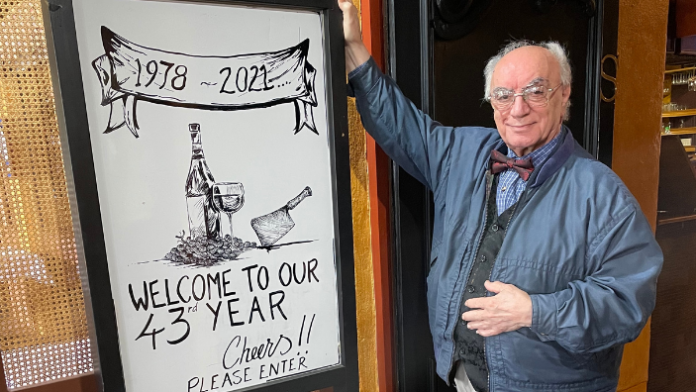 After 43 years of serving Adelaidians with the finest steak and managing his business with passion and dedication, Stratos Pouras, 84, is today one of the state’s longest running restaurant owners and a powerful specimen of exemplary men in hospitality.

Like many Greek Australian success stories, it all started with a suitcase and the will to prosper in a country away from post WWII and civil-war torn, Greece.

Born in Kokkinia, a suburb in the southwestern part of Athens in 1934, Stratos Pouras migrated to Adelaide with his father in January 1953.

“My mother had siblings already settled in Adelaide and although my father was a carpenter and was busy in Athens the spirit was to always go to a better place with more opportunities,” said Mr Pouras, owner of Stratos’ Cork and Cleaver.

“We didn’t come as assisted migrants. We had to pay about 250 British Pounds for a one-way ticket from Patra to Melbourne.”

His mother, brother and sister followed later in the year after they sold the family home in Athens.

‘I had nothing to do with restaurants’

A fifteen-year-old boy back then with no word of English, Mr Pouras says he didn’t find the first years in Australia hard. Soon after his arrival he started working at his uncle’s deli and cake shop located in Adelaide’s once bustling and affable Hindley Street.

“My uncle, Milton Hatzivasiliou owned two shops, opposite to each other. An old-fashioned deli on one side called ‘Stones’ and Milton’s Cakes on the other. This is where I learned English,” said Mr Pouras.

Some years later, young Stratos wanted to progress his career and got a job at Woolworths. In the meantime, he got married to his late wife Evdokia and their family was about to grow.

“I needed more funds to sustain our growing family and went to the employment office to request a pay increase or more work. They told me I was already getting paid 3 pounds more than other employees and that I should wait for a management position to become available but I knew I had no chances,” Mr Pouras said.

But life had other plans for ambitious Stratos Pouras.

“On that same day when I went out to lunch I ran into Steve Vidale. His family owned Sigalas Milk Bar, which was an institution in the 60s. I told him I was looking for a part time job. He said he only had an opening for a waiter at the restaurant located above the Milk Bar.

“I had nothing to do with restaurants but I thought to try. By the end of the first day, I knew what I would be doing for the rest of my life.”

Mr Pouras still praises the chef and the Hungarian head waiter who helped him make his first steps into an industry that later on became his life.

The birth of Stratos’ Cork and Cleaver

In 1965, the Hungarian Head waiter left Sigalas’ restaurant to become manager at the Arkaba Hotel that had just opened a year before.

“He kept calling me, telling me a Head Waiter’s job was waiting for me at the Arkaba and although I found it hard to leave Steve [Sigalas] who gave me opportunities I decided to take the job,” said Mr Pouras.

“I met people and made many contacts there. At some point I got a call from two people who wanted to start a restaurant. I had no money but I knew how to manage a hospitality business successfully and so I accepted the challenge.

“In February 1967 we opened Swains Seafood Restaurant which soon became a roaring success. We had a good formula that was working.”

To complement the seafood restaurant, the partners later on decided to open a steak restaurant.

“John Swain had a friend from America, John Short, who was visiting Adelaide at the time. He said there was a steakhouse chain in the US called Cork and Cleaver and he suggested that we visit the restaurant in Tucson, Arizona.

“Within a week my wife and I were having dinner in Arizona. I saw what they did, I liked it and in early September 1978, Stratos’ Cork and Cleaver was born and again we had the same success as with Swains.”

The partnership came to an end in 1988, but Mr Pouras who has been running the restaurant since day one bought his partners out and kept on working.

For the last 43 years, Stratos Pouras has been putting in twelve hour days.

When asked what motivates him to keep working he doesn’t need to think much.

“A restaurant is a living spirit. This is my life. I have three daughters, seven grandchildren and one great grandchild and between this restaurant and the family, my life is full.”

The first boss of SA’s next Governor

Stratos’ Cork and Cleaver is not only known for its good service, fine steaks and soutzoukakia that are served to the diners free of charge with hot bread and virgin olive oil as soon as they sit down.

The Greek’s restaurant is embedded in memories of generations of South Australians and became the first job place for many of the state’s well-known personalities.

“I think this story will be of interest to you,” Mr Pouras tells me as we are ready to wrap up the interview.

“In the early 80s a very polite blonde girl came in to ask for a job. She was holding a folder with her academic records and birth certificate. She told me her names was Frances Adamson. Her mother, Jennifer Adamson, was the then Minister for Health and tourism in the Tonkin Government and a customer of ours,” he said.

“I hired her and she started waitressing. She was very clever. After 2-3 years she told me that she would go to Canberra to study political science. She left, but her mother kept coming and through her I was learning about Frances.”

Next month, Frances Adamson who is considered one of Australia’s most accomplished and respected public servants and diplomats will become South Australia’s new Governor succeeding Hieu Van Le.

“My little girl will be our Governor,” Mr Pouras says proudly as he holds a laminated paper clipping from a local newspaper announcing Adamson’s appointment.

I ask him what the future holds for the business but Stratos Pouras knows the legacy will continue through his daughters, Elli, Christine, Diana, son-in-law Jim and his grandchildren who are by his side.

His advice for generations to come;

“Love what you do, be soft with people but tough in business, love your staff equally and work hard,” he says.