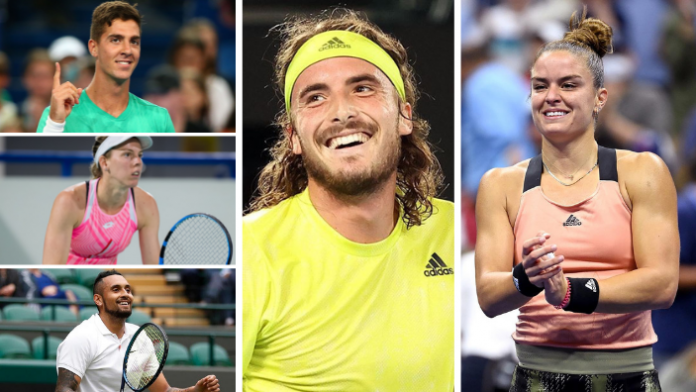 It’s that time of the year again! The sun is out and there’s anticipation in the air as Adelaide, Sydney and Melbourne all prepare to host some of the world’s best tennis stars for a number of upcoming tournaments.

First up is the Adelaide International, which will run from January 2 to 9 next year. Greek tennis legend, Maria Sakkari, and 28-year-old Despina Papamichail, have both already arrived for the tournament and have begun training.

They will go up against eight of the world’s top ten women in tennis, including defending champion Iga Swiatek, Ashleigh Barty and Aryna Sabalenka.

Elsewhere, South Australian tennis player, Thanasi Kokkinakis, has also been awarded a wildcard for the first week of the Adelaide International.

Kokkinakis will be making his debut at the tournament as he continues to make his comeback from injury.

Stefanos Tsitsipas sharpens skills ahead of ATP Cup in Sydney:

With just two days to go before ATP Cup kicks off on January 1, Stefanos Tsitsipas honed his game on the practice courts at Sydney Olympic Park on Wednesday.

In his first practise at this year’s event, Tsitsipas worked out under the watchful eye of his father and team captain Apostolos.

The World No. 4 spearheads Greece in Group C and is scheduled to meet Hubert Hurkacz, Diego Schwartzman and Nikoloz Basilashvili in group play.

After withdrawing from the ATP finals this year due to an elbow injury, Tsitsipas’ season certainly ended on a low note. But it was still a great season for him, where he won two titles and reached his first French Open final.

He hopes to kick off this new season with a bang and of course, with the support of Greek Australians.

Nick Kyrgios’ path towards the Australian Open appears set, with the Aussie accepting a wildcard entry to the Sydney Tennis Classic.

Kyrgios, now ranked 93rd in the world after a quiet 2021 season, will contest the Sydney Tennis Classic from January 10.

“I’ve been training at home in Canberra and here in Sydney and I feel good after an extended break from the game,” Kyrgios told ABC News.

“I’m looking forward to the final hit-out before the Australian Open, thanks to Tennis Australia for the opportunity to play.”

Kyrgios will go up against strong contenders at the tournament, including Australian men’s number one Alex De Minaur.