Sydney Olympic begin building their squad ahead of upcoming season 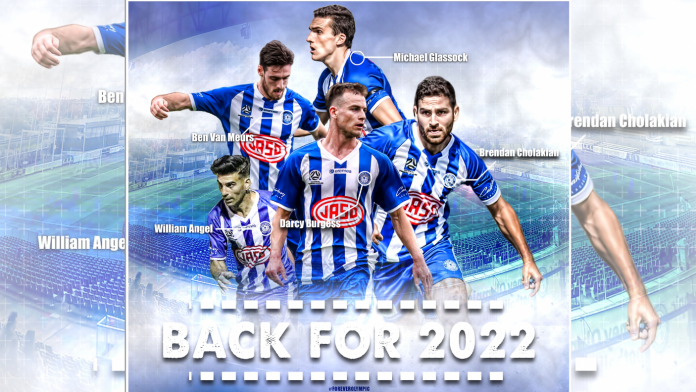 The club has announced that five players from last year’s roster will re-join the team, while new signings are soon to follow.

More specifically, defenders Michael Glassock and Ben van Meurs, alongside midfielders William Angel, Brendan Cholakian and Darcy Burgess, have all agreed to remain at the club throughout 2022.

The 21-year-old defender Michael Glassock record\ed 17 appearances and one goal before last season came to a premature end. As for the rest of this group of players, van Meurs has played 26 times and scored twice for the blue-and-whites, Angel has 28 appearances across three seasons, while Darcy Burgess is one short of that. Finally, Brendan Cholakian was quick to gain his position in the team’s midfield, as only last season he was able to score twice in 15 games.

The club’s CEO John Boulous made the following statement regarding the renewal of the collaboration with the aforementioned group of players:

“Over the coming weeks we will be announcing both the players that have re-signed for the Club as well as our new signings that will call Olympic home in 2022.”

“Today, we would like to welcome back defenders Will Angel, Michael Glassock and Ben Van Meurs, while midfielders Brendan Cholakian and Darcy Burgess will be back in Blue in 2022”.

Additionally, club manager Ante Juric pointed out that his team’s potential will greatly increase with the inclusion of this group within the squad:

“These players will again provide a great mix of youth and experience within our squad”.

“As we know the 2021 season was cut short and with a young squad, we were in the top 5 and had qualified for the Round of 32 of the FFA Cup. We are confident we will build on this strong foundation set last season from a squad full of youth, aspiration and enthusiasm for the season ahead”.