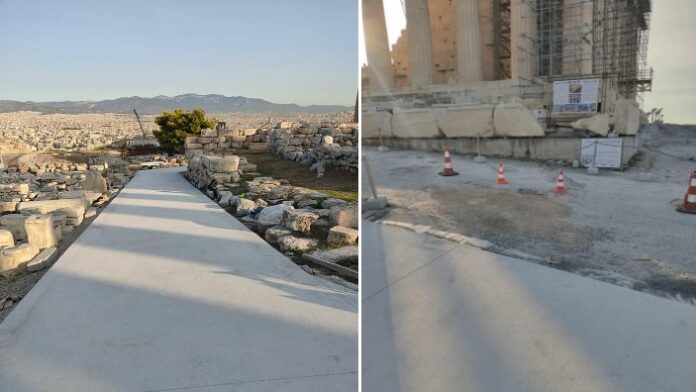 Greece’s Ministry of Culture has been slammed by archaeologists and people on social media after photos emerged of cement paths covering sections of the Acropolis.

According to the Ministry, the cementing of certain areas aims to facilitate access for visitors with mobility problems and disabilities, as well as seniors and visitors with health problems.

The project had been unanimously approved in May by the Central Archaeological Council (KAS) and includes an elevator for people with a disability.

But protesting archaeologists and the internet community argue that other materials such as wood, plexiglass or metal ramps could have been used to avoid any potential destruction.

In response, the Culture Minister, Lina Mendoni, issued a statement, claiming that the cement critics had no “culture.”

“The Ministry of Culture expresses its joy that sensitive citizens were concerned about the routes, which are paved on the Acropolis in order to facilitate the access of the disabled, the elderly and citizens with health problems,” the statement reads.

“At the same time, it regrets that the same sensitive citizens who are protesting have not visited the Acropolis for at least twenty years, when these roads were paved with cement.

“The difference is that over time and with the passage of millions of visitors, all these years, the material has been destroyed and the routes are a trap even for those who do not have mobility problems.”

The project is reportedly funded by the Onassis Foundation, which has also funded the recently upgraded lighting system at the Acropolis.