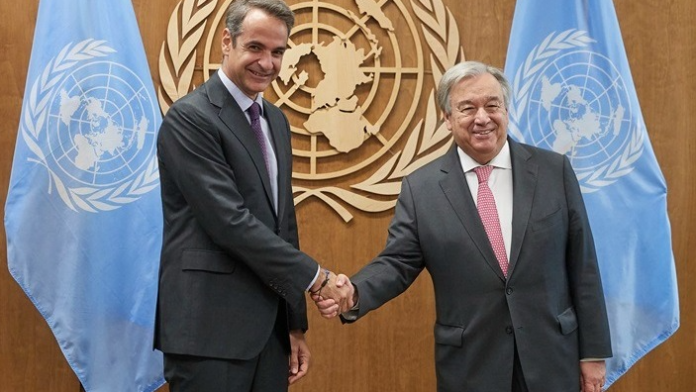 The Cypriot issue, the situation in the eastern Mediterranean Sea and the innovations made by Greece towards climate change were but some of the issues on the agenda as Greek Prime Minister Kyriakos Mitsotakis met with Secretary-General of the United Nations Antonio Guterres during his visit to New York.

Mr Mitsotakis pointed out that Greece will remain a supporter of peace and stability, adding that his country will always seek to collaborate with its neighbours in the eastern Mediterranean in order to seek out a resolution to current affairs, based on the United Nations’ Law of the Sea (UNLCOS) and international laws of justice.

He added that the Turkish violations of Greek waters go against these laws and the map drawn by the UN.

In regards to the Cypriot dispute, the Greek PM stressed that the single path of negotiation towards solving this important matter can be found from the voting procedures of the UN’s Safety Council. He added that any proposal coming from a third party cannot be accepted as a basis for further discussion.

Mr Mitsotakis also expressed the nation’s full support towards the UN’s efforts on climate change. He said that environmental support was one of the main issues of his own government’s policies.

Regarding the migrant matter, the Greek PM stated that his country has lifted more than its fair share of the load, while adding that Greece has also been quite hospitable towards all the vulnerable groups such as the unaccompanied children.

Finally, during their meeting, Mr Mitsotakis and Mr Guterres talked about the situation in Libya, with the PM expressing Greece’s support towards the UN’s efforts to remove all foreign powers from the nation and to hold the elections at the predetermined time.

During his visit to the city of New York, the Greek leader also met with the owner of the US tech giant Microsoft, Brad Smith.

The two men had the opportunity to talk about various topics, such as the company’s continuous investments in Greece despite the ongoing pandemic and the rising dynamic of the Greek economy.

Mr Mitsotakis had previously met Brad Smith at the World Economic Forum back in January. It’s worth pointing out that Microsoft are in the process of developing their brand new data centres in Athens, while the companies headquarters in Greece has seen one of the biggest rise in personnel worldwide.

The Prime Minister was also scheduled to visit the Greek Orthodox Church of Saint Nicholas at Ground Zero, however due to an issue with the Archbishop of America Elpidoros, who attended a Turkish-organised event, a move which was heavily scrutinised by the Greek Government, the visit has been canceled.

It will instead be replaced by a meeting with the management team of the Wall Street Journal.