Peter Kekeris: A player who strikes like ‘lightning’ in the attack of Sydney Olympic FC 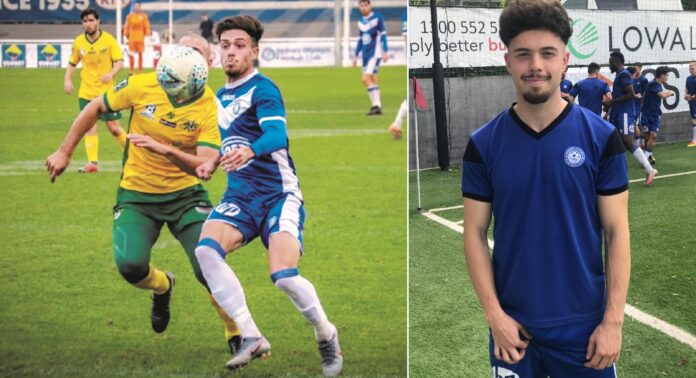 22-year-old Sydney Olympic FC attacker Peter Kekeris has been an essential asset for the club this season, striking fear and terror into the opponent’s defence.

Kekeris was born in Sydney on May 7, 1999, to parents George and Vasiliki. He grew up in Roselands alongside his brother, Nicholas. With his grandparents hailing from Nafpaktos and Patras, Kekeris has a love for Greece and Sydney Olympic.

TGH: When did you start playing football?

Peter Kekeris: I started in the fields, on the street and in the parks, always believing I had the potential to enter the Sydney Olympic academies. I was at the NSW Institute Of Sports for U12, U13, then at the U14 academies, and when I entered U15 I participated in a National Tournament.

In the U17 I participated with the Socceroos U-17 side (Joey’s), taking part in seven international matches under coach Tony Vidmark.

In 2018-19 I went to the A-league to play with the Central Coast Mariners, leaving to join Sydney Olympic in 2019.

TGH: How were your experiences abroad?

Peter Kekeris: I had gone to France to try out in Lille for 15 days, where I learned a lot, but allowed myself to go back to Sydney. I signed with the Mariners under coach Ben Cahn and then with the first team under coach Mike Mulvey. I participated in 7 competitive matches in the World Cup. It was a change and a great experience.

TGH: Why did you leave Mariners?

Peter Kekeris: They had a lot of administrative problems and I wanted games on my feet, so I decided to go back to my favourite team, Sydney Olympic FC.

TGH: What is it that binds you to the team?

Peter Kekeris: It is a team made up of family, which also contains Greek Heritage. It is very moving to be encouraged by the team, alongside the fans who have loved this group.

TGH: What are your dreams?

Peter Kekeris: For the Sydney Olympic team to win the Championship. To be able to put a small stone in the successes. Then, like any footballer, to be able to transfer to an A-League team or to Europe. Everything is in my plans. For the time being, the group is paramount.

TGH: In the most recent home games you were on the bench, how did you feel?

Peter Kekeris: I have complete confidence in coach Ante Juric. Either I am on the bench or am in the starting lineup

I give everything for the group. This is how every player I think should play. There is love in the team which is the biggest weapon this year for Sydney Olympic.

TGH: How do you see Australian football? Are there any talents that will emerge?

Peter Kekeris: Talents have always been her and will come. There just has to be proper planning and guidance from the coaches, from the club officials and of course from the official body of the Football Federation, whether it is the FFA or Football NSW.

In my opinion, more motivation should be given from the young ages in order for little ones to be able to join the first teams later. In short, you need faith and trust from the clubs to the little ones. It is a long-term investment, but it will bear fruit in the long run.

A team player with tremendous speed. He reminds me of players from the past like Julio Losada of Olympiacos, or Takis Hatziioannoglou, the legendary “Chaf” of Ethnikos Piraeus.

A “siphon” in the Sydney Olympic attack, I can say with certainty that Peter Kekeris is the modern “Chaf” of the domestic competition, and the Losada at the Olympics. He is the “Lightning” in the attack of Sydney Olympic.

The Greek Herald wishes him many goals, strength and above all, health.