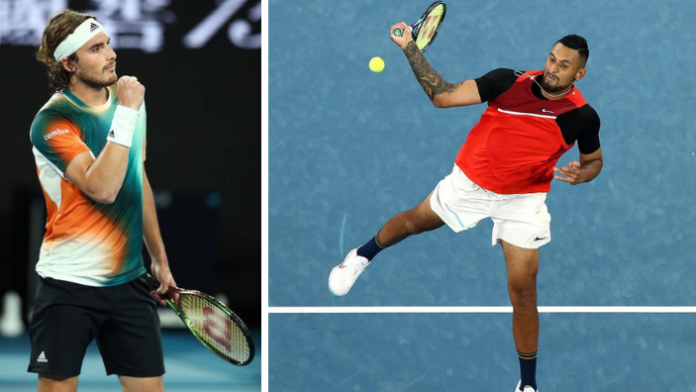 It was a full-on day of tennis on Tuesday as the men’s and women’s singles first round matches at the Australian Open were all wrapped up.

Amongst those playing for a place in Round 2 of the tournament were Nick Kyrgios and Stefanos Tsitsipas.

Here’s a rundown of how their matches went down.

During the match, Kyrgios fired down 21 aces against Broady, including a 220km per hour effort, and conceded only one double fault.

He also landed 81 percent of his first serves in the court and gave up only a single break point.

Throughout it all, the crowd were entertained by the Canberran’s usual antics. At one stage, he even flicked the ball between his legs to the Briton.

“Obviously I served… well today,” the hometown hero said with a smirk as the crowd roared its approval after the match.

There were concerns for Kyrgios ahead of his match after he contracted COVID-19 just last week. He admitted in his on-court interview that he was bedridden for two days.

“I was concerned I wasn’t going to be physically ready to play. I took it day by day, looked at the bright side and took pressure off,” Kyrgios said.

“I was so excited to be here, first match of the year, my favourite court in the entire world.”

Greek world number four, Stefanos Tsitsipas, put on a clinical show in his opening round match at the Australian Open on Tuesday, claiming a straight-sets win against Mikael Ymer of Sweden 6-2 6-4 6-3.

Tsitsipas broke Ymer seven times and hit 30 winners to seal the contest in two hours and 10 minutes in the final match of the second day at Rod Laver Arena.

The Greek, however, was not happy with the 38 unforced errors he committed in the match.

“There were a lot of rallies, a lot of ball exchanges, he gave me a hard time, he was going after every single ball and stayed in the match for as long as he could,” Tsitsipas said in his on-court interview.

“I will be trying to decrease the amount of unforced errors, I think I had a few more than I usually have. I’ll be trying to keep the consistency and trying to attack a bit more, be a bit more daring in certain moments.”

The French Open finalist showed no signs of discomfort from a right elbow issue that forced him to miss a number of matches at the end of last season and also did not allow him to play at full tilt at the start of 2022.

Ymer showed glimpses of his talent and had his chances but could only convert two of his 11 breakpoint opportunities. The frustration ultimately got to the Swede as he kept punching his towel-clad head repeatedly during a changeover.

The Greek will next meet Argentina’s 21-year-old Sebastian Baez, ranked 88th, for a place in the third round.