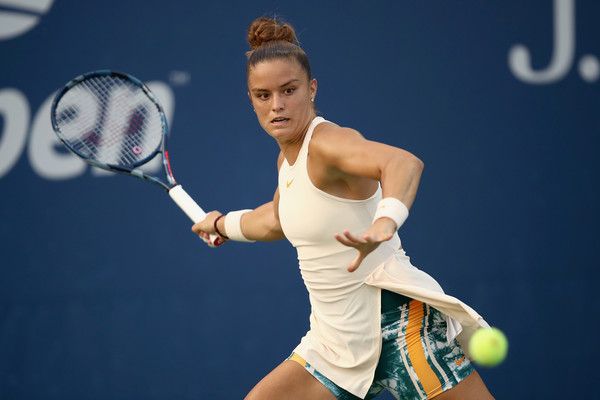 No.15 seed Maria Sakkari had her hopes of playing in a US Open final crushed by Serena Williams last night, after an immensely hard-fought game 3-6, 7(6)-6, 3-6.

Sakkari dominated the early stages of the match, outhitting Serena and sending a message to her storied opponent by delivering three aces in her opening service game of the match.

The Greek had three break points in the fifth game but failed to take any of them and duly paid the price as punishing hitting forced Sakkari to fire a forehand into the net and give Williams the break.

An ace sealed the first set for Williams, who was left screaming in frustration at the end of a gruelling second as a net cord brought up set point for Sakkari.

Williams saved that set point and another to force a tie-break that was dominated by Sakkari.

The world number 22 raced into a 4-0 lead and, though a powerful winner from Williams saw off another set point, an overhit forehand sent the contest into a decider.

Williams again went long in the opening game of the third to surrender the break, which Sakkari consolidated despite some shaky serving.

But Williams brought concerted pressure on the Sakkari serve two games later and it told as she broke back with a blistering cross-court forehand.

That marked a changing of the tide and Williams brought up three break points in the eighth game of the set, taking the third thanks to a tame off-balance forehand into the net from Sakkari.

Despite admirable resistance from Sakkari, there was never a sign of Williams failing to serve out an absorbing match and staying on track to finally end her wait for major number 24.