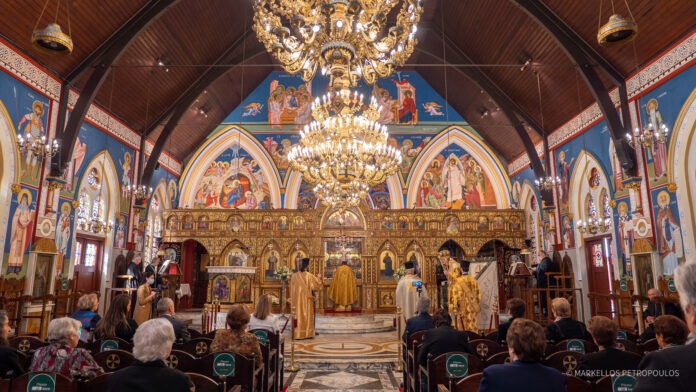 With much joy and emotion, His Eminence Archbishop Makarios of Australia was among the faithful of the Parish of St Nectarios in Sydney on Sunday morning, 6th September, to celebrate a historic milestone for their parish.

It was 6th September 1970 when the church, which until then belonged to the Methodists, was officially handed over to the Greek Orthodox community of Burwood.

During the handover ceremony, a Doxology service was held by the late Archbishop Ezekiel, who three years earlier had given his blessing for the Greek Orthodox community to form a committee to find a suitable place for the purchase or construction of a church.

Exactly fifty years later, in the same place and in an atmosphere of joy and emotion, a Hierarchical Divine Liturgy was conducted, presided over by His Eminence Archbishop Makarios.

The President of the Parish-Community and members of the Board of Directors were among those present, as well as members of the Philoptohos Association.

Two members of the committee that was founded in 1967 – Mr Peter Kariatlis, who was the first treasurer of the Parish-Community, and Mr James Soulos, son of the first president, the late Andrew Soulos – were also present.

He then expressed his gratitude to those who struggled and laboured, offering money and devoting their precious time for the acquisition of the Holy Parish of St Nectarios and for its future progress.

He did not fail to mention his predecessor, Archbishop Ezekiel of blessed memory, as well as the late Fr Ezekiel Petritsis who, as he noted, “struggled and laboured and was ‘spent’ for this parish.”

During the Divine Liturgy, Archbishop Makarios raised the Parish Priest, Fr George Liangas, to the rank of Spiritual Confessor.

Following the liturgy, a small luncheon took place at The Glasshouse, Le Montage for the Board, Ladies Philoptochos, Church Committee and chanters.

His Eminence, Father George and President, Penelopy Kioussis, marked the occasion with some short speeches and Vice-President, Chris Syrios, presented His Eminence with a gift as a token of appreciation.

Larger celebrations, to allow more people to celebrate the 50th anniversary, will hopefully be able to go ahead in 2021.