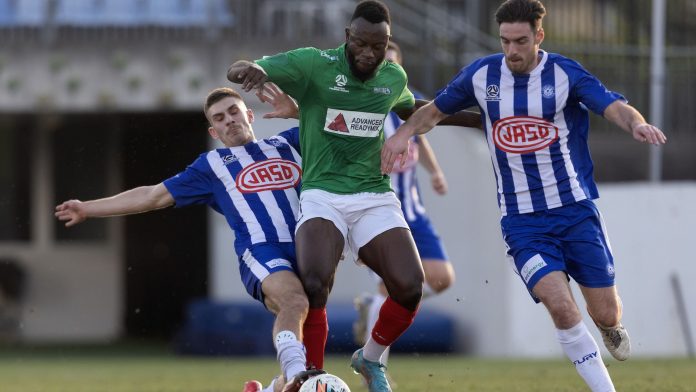 The Marconi Stallions secured a sensational 3-2 victory over Sydney Olympic at Belmore Sportsground on Sunday evening, with a 92nd minute goal the difference in a hard-fought battle.

After an even first half, Marconi were the first to get on the scoreboard in the 53rd minute from an Olympic own goal, and doubled their advantage in the 72nd minute through Charles Lokolingoy.

Two penalties in the 78th and 84th minute saw Roy O’Donovan net two for Olympic to enter the final minutes of the match on even footing, but a goal from Marconi substitute Chris Hatfield in the 92nd minute saw the game end in exhilarating fashion.

As the Premiership and finals race heats up in the final stage of the season, the three points will be instrumental in the Stallions’ run to the finish.

The two sides faced up in the Round 16 Match of the Round in what was set to be a tense and physical battle as is the usual battle between the two historic clubs, and that it was.

Fans in the stands were in hysterics as Olympic put all their effort into another equaliser but they couldn’t manage to make it happen, leaving Marconi with an all-important three points in a sensational finish to the game.

Marconi coach Peter Tsekenis was pleased his side was able to keep their attacking pressure until the end to secure the win.

“We got up to 2-0 and I thought we were doing really well,” he explained.

Olympic captain Michael Glassock was disappointed his team couldn’t get the win but was proud of the camaraderie between the team that kept them in the game.

“We showed tremendous fight and courage to get back into the game,” he said.

“I think in this game, especially in that second half when we had the momentum going with us, when we play like that we’re going to be very hard to beat in the final six games of the season.