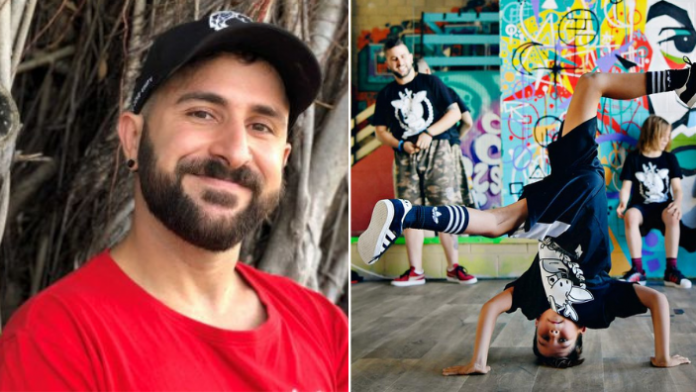 Michael ‘Triki’ Trikilis is a fixture in the Northern Territory’s breakdancing scene.

He recently spoke with the ABC’s Miranda Tetlow about spending his childhood between Darwin and Kalymnos, being hit by 18,000 bolts of lightning, and discovering his passion for break dancing.

Triki was born in Karama, Darwin, and moved to Greece with his mum and extended family at just seven-years-old.

He describes Kalymnos as “a really beautiful jail” but admits it taught him some hard lessons early on in life.

“I felt like my personality, especially being born in Darwin in Australia, was a bit too colourful… a bit too unique for everyone in Kalymnos,” he says.

“When I moved to Greece, I didn’t know how to speak much Greek,” he says, explaining that he “got a… bit of racism too, being the only non-Greek speaking kid there….”

“I didn’t really understand why I was viewed differently, even though I looked and behaved the same, I just didn’t understand the language.”

Breakdancing was Triki’s lifeline during his time in Greece.

He first came across the Olympic sport while on a school trip in Athens.

He says he was blown away by the diversity and multiculturalism within the circle and noted it was “very foreign to everybody [else] but pretty familiar to me”.

He introduced themselves to the group and the rest was history.

He says he and his friends rose to the ranks of some of Greece’s best breakdancers in competitions that were held between 30 and 40 schools across twelve islands, including Kalymnos.

“It was the first time my principal ever looked like he was that proud of me at school,” he says.

“I was normally the kid that got in trouble and then we brought in a Panhellenic trophy that was silver that didn’t fit in the trophy cabinet at the school.”

“There’s so much freedom in [break-dancing],” he tells ABC’s Late Lunch.

“You can be happy, angry, funny, you can be anything.”