‘I hope to be back next year’: Stefanos Tsitsipas loses to Djokovic in French Open final 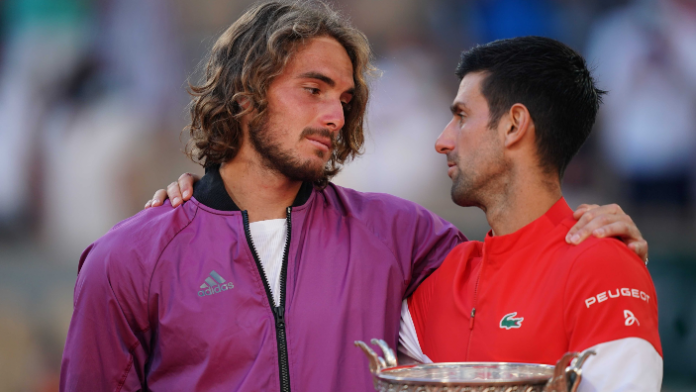 The 22-year-old Greek looked poised in his first grand slam final, going two sets up before it all fell apart against the world No.1.

Tsitsipas won the first set after erasing a set point in the tie-breaker with a difficult forehand winner. In the second set he looked fresher than the 34-year-old Djokovic, who was coming off an epic semifinal against Rafael Nadal.

But Djokovic steadied his game in the third set, which turned in the fourth game, when he converted his fifth break-point chance of the game.

After that, Tsitsipas appeared to lose his way, while Djokovic found his form.

During the changeover before the fourth set, Tsitsipas laid on his back and was stretched out by the trainer, a back injury apparently hindering his movement.

Fifth seed Tsitsipas appeared to be struggling physically but valiantly tried to dig in at the start of the fifth set as the shadows spread across a sun-lit Court Philippe Chatrier.

But Djokovic got the early break in the decider and although he was pushed hard, he was never threatened again.

There were nerves as he served at 5-4, netting an easy volley and then seeing a Tsitsipas backhand flash past him on championship point. However, Djokovic would not be denied at the second time of asking after four hours 11 minutes.

It was the sixth time in his career Djokovic had overcome a two-set deficit to win – and he did it in front of a vocal Roland-Garros crowd that was very much weighted in favour of the Greek.

In moving just one behind the record of 20 shared by Rafa Nadal and Roger Federer, Djokovic became the first player in the professional era to win each grand slam title twice.

After the match, Tsitsipas thanked his Greek fans in the audience and vowed to be back better than ever next year.

“I believe I’m able to play for titles like this. Despite my loss today, I have faith in my game and I very much believe I can get to that point very soon,” Tsitsipas said.

“If I don’t downgrade myself, I see no reason for me not to be holding a trophy one day.”