Greek Australians recognised in the Queen’s Birthday Honours for 2021 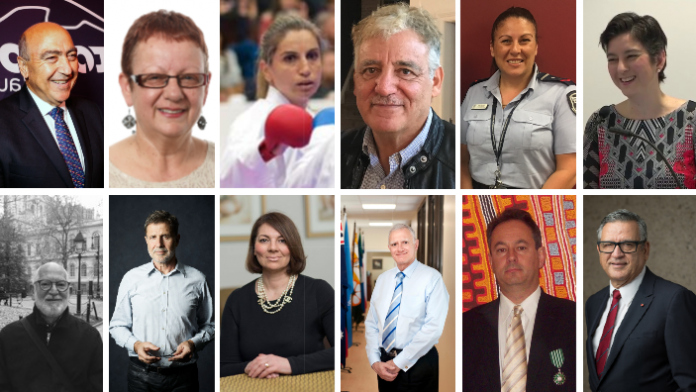 At least 14 prominent Greek Australians in the areas of community service, visual arts, health, architecture and sport have been recognised today in the Queen’s Birthday Honours List for 2021.

They are part of a larger group of 1,190 Australians who’s contribution to their community was noted by their peers as worthy of recognition.

“Each of these individuals are unique and their story deserves to be shared widely and celebrated,” the Governor-General said when announcing the list.

“Collectively, they speak to who we are as a nation. There are countless examples of selflessness, commitment and dedication. There is diversity and there are examples of exceptional achievement in almost every field imaginable.”

Here are the Greek Australians who were recognised:

Dr Michelle Cretikos has been awarded the Public Service Medal (PSM) and has also been named in the special COVID-19 Honour Roll. She has been recognised for outstanding public service to community health in New South Wales.

Dr Michelle Cretikos commenced with NSW Health in 1998, and since that time has been passionate about making a difference to people’s lives through the delivery of health care services, and more recently through high quality, evidence based policy development and implementation.

As the Executive Director, Centre for Alcohol and Other Drugs, she led the Ministry of Health’s response to music festival harm reduction. This required her to work across government with music festival organisers, private medical providers and other stakeholders.

Evie Georgas has been awarded the Australia Corrections Medal (ACM). She has been recognised for her work with the Queensland Corrective Services (QCS).

Ms Georgas commenced her career with QCS in 1996 as a Custodial Correctional Officer. Her commitment, expertise and desire to work collaboratively has led to her being held in high regard amongst staff, stakeholders and prisoners.

As Regional Manager, Sentence Management, she has played an integral role in the operational and cultural transition of sentence management service provision, from a locally managed service, to a regionalised service delivery model with centralised accountability and a state-wide focus.

Her knowledge of centre operations and the role of a Custodial Correctional Officer, Community Corrections and Sentence Management Services has resulted in a significant and ongoing contribution to the safety and dynamic security of the centres she services.

Through her efforts she continues to assist prisoners in their adjustment to the correctional environment, providing increased opportunities for self-improvement and behavioural change.

Professor Leonard George Notaras AM has been awarded in the category of Officer (AO) in the General Division of the Order of Australia, as well as the special COVID-19 Honour Roll. He has been recognised for his distinguished service to medical administration in the Northern Territory and to professional organisations.

Professor Notaras is a proud Kytherian who has held roles in institutions such as the NT Department of Health, the Australian Medical Association NT, and Royal Darwin Hospital as their Medical Superintendent and General Manager.

Currently, he is the Executive Director of the National Critical Care and Trauma Response Centre in Darwin, coordinating Australia’s response to COVID-19 and repatriation.

In 2019, there was also a Notaras ACHSM Fellowship Program named in his honour at the NT Department of Health and the Australasian College of Health Service Management.

Lee Christofis has been awarded this year in the category Member (AM) in the General Division of the Order of Australia. He has been recognised for his significant service to the performing arts, particularly to dance.

Since 1981, Mr Christofis has been a dance critic, arts commentator, producer and broadcaster. During this time, he was also the National Vice President of Ausdance (1996-2004).

Between 1966-1970 he was a dancer at Queensland Ballet and later, in the 1970s, became a board member. He’s also worked as a Curator of Dance at the National Library of Australia and in the field of early childhood education in both Melbourne and Brisbane.

Awards he has received include the National Dance Award from Ausdance in 2009 and the Victorian Award for Excellence in Multicultural Affairs in 2001.

Epaminondas Katsalidis has been awarded in the category Member (AM) in the General Division of the Order of Australia. He has been recognised for significant service to architecture and to sustainable construction innovations.

Since 2001, Mr Katsalidis has been a co-founding partner in Fender Katsalidis Pty Ltd. He is a leader in the integration of art into architecture with notable buildings including the Melbourne Terrace Apartment, Republic Tower and Eureka Tower.

When he’s not doing all the above and winning awards such as the Enduring Architecture Award from the Australian Institute of Architects, Victoria Chapter, in 2019, he’s also been an international jury member in the architectural competition for the new Acropolis Museum.

John George Kotzas has been awarded in the category Member (AM) in the General Division of the Order of Australia. He has been recognised for significant service to the performing arts as an administrator and artistic director.

Since 2008, Mr Kotzas has been the Chief Executive Officer of the Queensland Performing Arts Centre (QPAC). He’s also previously held the Artistic Director and Education Officer roles at the QPAC.

Other roles in the performing arts which Mr Kotzas has held include, but are not limited to, the Vice President of the Executive Council for Live Performance Australia since 2012, and the Inaugural Managing Director of the Brisbane Festival in 1996.

Mr Kotzas has also received the Cavaliere dell’Ordine della Stella d’Italia (Knight of the Order of the Star of Italy) from the Italian Government in 2016.

Andrew Papadopoulos has been awarded in the category Member (AM) in the General Division of the Order of Australia. He was recognised for significant service to motorsport and to driver safety and education.

In the Federation Internationale de l’Automobile, Mr Papadopoulos has been a Motorsport Australia Deputy Delegate at the World Motor Sport Council since 2006; President of the FIA ASN (National Sportinf Authority) Development Task Force since 2013, as well as a current member of the Officials Commission and the Single Seater Commission. Currently, Mr Papadopoulos is also a race steward for the Formula 2, Formula 3 and Formula E.

When he’s not doing all of the above, Mr Papadopoulos is also known for his work with the Alfa Romeo Owners Club of Australia and he is a Proprietor at Kiss Pallets (Keep It Simple Systems) since 1985.

Maria Alexiadis has been awarded in the category Medal (OAM) of the Order of Australia in the General Division. She has been recognised for her service to karate.

At the 2019 Oceania Championships and the 2012 Premier Series A League in Athens, Ms Alexiadis was a gold medallist. At the 2013 World Games in Colombia, she was a bronze medallist. Between 2016-2017, she was a member of the Victorian Olympic Council Education Committee.

Since 2001, Ms Alexiadis has also been a senior research assistant in steroid receptor biology at the Hudson Institute of Medical Research (HIMR). She was also the recipient of the HIMR Values Award, 2021 for Excellence, Innovation, Collaboration and Community.

George Amarandos has been awarded in the category Medal (OAM) of the Order of Australia in the General Division. He has been recognised for service to the Greek community of Queensland.

Since 1995, Mr Amarandos has been Chair of the Saint Nicholas Nursing Home in Highgate Hill. He has also been Secretary at the nursing home (1983-1995) and a Committee Member (since 1982).

In 2020, Mr Amarandos received the medal of the Christ Loving, Greek Orthodox Church in Australia.

Dr Costas Costa has been awarded in the category Medal (OAM) of the Order of Australia in the General Division. He is being recognised for service to medicine as a general practitioner.

Dr Costa has held roles at the Doctors Reform Society including being the former national President, the former NSW President, a member for 40 years and now a life member. He has also been a member at the Medical Association for Prevention of War (Australia), as well as the International Physicians for the Prevention of Nuclear War (since the 1980s).

Arthur Papadimitriou has been awarded in the category Medal (OAM) of the Order of Australia in the General Division. He has been recognised for service to the galleries sector.

Mr Papadimitriou is the Founder and Director of the Arthur Papadimitriou Collection; an ongoing supporter of the Wilin Centre for Indigenous Arts and Culture Development at the Victorian College of the Arts and a Donor of the Musee Du Quai Branly in Paris in 2006.

Helen Patsikatheodorou has been awarded in the category Medal (OAM) of the Order of Australia in the General Division. She has been recognised for service to the community of Hume.

Ms Patsikatheodorou was Mayor of Hume City Council from 2011-2012 and 2015-2016. Between 2008-2016, she was a Councillor. She is a current Community Member of the Friends of Aileu Community Advisory Committee (a project supported by Hume City Council).

Currently, Ms Patsikatheodorou is also the Treasurer of the Dallas Neighbourhood House, as well as a Board Member of the Meadow Heights Community Foundation, a Board Member and Former Treasurer at the Meadow Heights Education Centre, and a Member of the Community Reference Group at the Hume Community Change Maker Program. She is also an Electorate Officer at the Office of Maria Vamvakinou MP, Parliament of Australia.

When she’s not doing all of the above, she’s also worked with multicultural groups including the Greek Orthodox Community of Broadmeadows and Districts as Treasurer, and has also worked in the childcare and health sector.

Ms Patsikatheodorou’s roles in this sector include, but are not limited to, Founding Director of the Broadmeadows Multicultural Early Learning Centre, circa 1988; and Founding Member of the Neurofibromatosis Association of Victoria (15 years).

Faye Spiteri has been awarded in the category Medal (OAM) of the Order of Australia in the General Division. She has been recognised for service to the community through social change organisations.

Other awards received by Ms Spiteri include the Australian Multicultural Marketing Awards; an Inductee of the Victorian Women’s Honour Roll in 2019; and the Victorian Premier’s Achievement Award in 2001.

Prof Athan, who is director of the Barwon South West Public Health Unit, has been awarded an OAM for service to infectious diseases medicine.

Prof Athan originally hails from Sydney and grew up in Melbourne, and has lived in Torquay since he started working at Barwon Health.

He has contributed to or co-authored more than 180 peer reviewed articles, chapters and papers in medical journals and books.

Co-founding the Geelong Centre for Emerging Infectious Diseases in 2013 is another of his impressive achievements.

He was director of the infectious diseases department at Barwon Health from 2004, and was promoted to director of the region’s newly-formed public health unit last year.

* Please note the below list includes the names of those who are recognised as Greek. If you know someone else, please email us at greek@foreignlanguage.com.au.