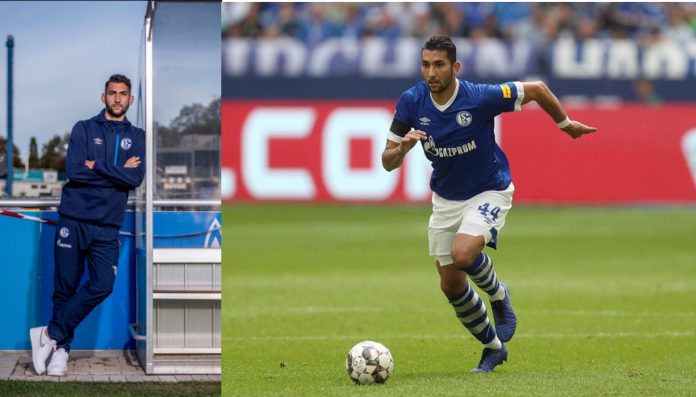 Greek Australian football player George Timotheou experienced more in the past year than many would in a lifetime. From playing for Schalke FC in one of the top five leagues in the world, to undergoing a life changing heart surgery, topped off with becoming a father in only two months time.

Describing the past year as a “massive rollercoaster”, George Timotheou reveals to The Greek Herald how he has gained a new perspective on his life.

“With COVID-19, the bushfires, my playing career and not playing so much in Belgium. Then off the back of a Bundesliga debut, being with the national team and finding out you’re going to be a dad,” Timotheou says to The Greek Herald.

“It’s been a massive rollercoaster but one now of immense joy because I can go back to doing what I love.”

While his heart beats strong for football, last year it beat with only three quarters of power. George Timotheou was born with a bicuspid valve. A heart condition that while rare, many people can go their entire lives without noticing.

Undergoing a medical check before joining Sydney FC at 17 years old, he discovered he had an irregular structural issue with his heart. Yet, the football player didn’t think much of it.

Only playing with Sydney FC for a year, Timotheou set out for more play time, joining the NPL with Belmore side Sydney Olympic FC.

Being born in Canberra to a Cypriot father, and his mother’s family hailing from Thessaloniki, he was excited to play for the club, recognising his Greek heritage as playing a “big part” of his life. Yet, even before arriving at Sydney Olympic, he was in talks for his big move overseas.

“They told me when I signed that it was in their plan to send me overseas,” Timotheou says.

“It wasn’t until 1-2 months before I left that I knew I’d be trialling at Schalke and get to train with the under-23’s team.”

George joined the German club seeking a new adventure, chasing his European football dream to play for a side in Europe’s top 5 leagues. Yet life in Germany wasn’t just eating bratwursts and drinking Pilsner at the pub.

“When I was there in the second week, I was put in German classes and by the time I had left, when I’d come back for my holidays after my debut, I was essentially speaking fluent German.

“The culture is also definitely different to what I’m used to and to what a lot of Aussies wouldn’t be used to, but it was definitely an eye opener.”

Much like Socceroos who had entered the Bundesliga arena before him, namely Matthew Leckie and Mitchell Langerak, settling into the German way of life was no easy task. Yet, with a clear task in mind, the Greek-Australian let his feet do the talking.

“From day one I went, I wouldn’t say with no expectations, but I just went with an open mind and an outside perspective that I’m here to do a job I’m not here on a holiday.

Having a successful pre-season with the under-23’s, he cemented his starting spot in the reserve squad. Yet it only took six games for the manager to realise that he was training with the wrong team.

“Two days after, I was called into first team training. I was the first one in that group, in the under-23s team, to be called up.

“Like I said I didn’t have expectations, I didn’t go there saying ‘I’m gonna be training with the first team after six weeks’.

“I just put my head down every session and did extra, tried to learn German best as I could in the first couple of weeks, and I just wanted to make a statement in the reserves and I guess that takes a lot of people’s attention and I guess that’s why I got my chance.”

Seeking more game time, Timotheou left Schalke for Belgian club Zulte-Waregem in July last year. However, also struggling for game time at the new Belgian club, he sought a move across the country back to the A-League.

Under a compulsory medical examination, Timotheou found out life-changing news about his bicuspid valve.

“It got to a point where it was leaking and regurgitating. It was basically making my heart bigger than what it should be, at a dangerous level where you’re at risk of a heart attack,” Timotheou said.

With it being only a structural problem, Timotheou was somehow relaxed and unfazed about the upcoming surgery. However, undergoing the surgery in March, he was amazed to see his heart go from operating at three quarters of a tank, to the heart of a horse.

“Now, basically that I have a new heart and new valve, I’m operating at full capacity.

“I’m just working towards getting back to full fitness. It’s very exciting because now I’m obviously at a better place than what I had been my whole career.”

Being cleared for training only three weeks ago, Timotheou is back on his dream football path. Yet, with a new fan on the way, his football career may be taking an alternate route.

“With my girlfriend just under 2 months before giving birth, it’s a bit of a lifestyle change,” Timotheou said admittedly.

“I think that’s what this whole thing has made me realise is, it’s not just me anymore. I have a son on the way so I have to think about him and obviously my girlfriend.

“Not so much put my dreams aside but they’re on halt for a second, in the back on your mind until the time presents itself.”