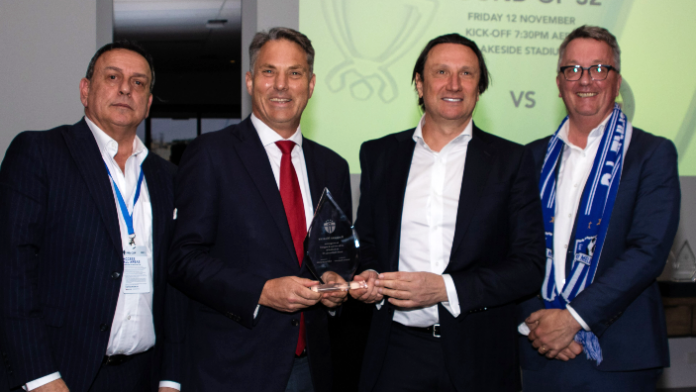 Deputy Opposition Leader, Richard Marles, was present at Lakeside Stadium on Friday where South Melbourne FC frustrated Melbourne City’s attack for most of the first 60 minutes of their FFA Cup match.

South Melbourne came close to equalising the match in the second half with a stunning free kick by Schroen that was saved by the fingertips of the Melbourne City goalkeeper.

Before a strong home crowd that brought back the memories of the National Soccer League days, South Melbourne was gallant in its defeat, ultimately losing 3 nil.

In the pre-match event, Mr Marles spoke about the importance of clubs like South Melbourne FC to the cultural and sporting fabric of Australia. He said that these clubs played a vital role in shaping our country and that South Melbourne stands as one of the iconic football clubs in Australia. He also said that its successful history speaks for itself and he welcomed its return to top flight football in the near future.

The club’s no.1 ticketholder, Victorian Health Minister, Martin Foley, was also in attendance. Minister Foley highlighted the need for South Melbourne to be included into its rightful place in the football community in Australia and pressed for the urgent implementation of a Second Division.

Minister Foley said that South Melbourne deserved to be playing football in a national competition as quickly as possible and implored the FFA to quickly implement the Second Division. Mr Foley emphasised how Lakeside Stadium was an integral part of South Melbourne FC.

Although South did not win the match, Club President, Nick Maikousis, was satisfied that South relived its glory days with the presence of a capacity COVID crowd and a spirited performance by the team which had limited time for its preparation.

This support of the team’s performance was also given by Andrew Mesorouni (Football Director) who praised the efforts of the team and its coach Esteban Quintas.

Mr Mesorouni said: “the team’s pregame tactics to deny Melbourne City FC scoring opportunities worked for well for over an hour. Although our opponent was a stronger team, our game tactics was to be defensive with counter attacking football. We are proud of our players and the result was respectable given we had not played competitive football for 3 months.”

South’s Chairman, Bill Papastergiadis, thanked Mr Marles and Mr Foley for making themselves available for the match and for showing their strong support for the Club.

Mr Papastergiadis said: “Martin Foley has demonstrated over a long period of time through his actions that he is worthy number 1 ticketholder. He has intervened successfully in all of the major hurdles the club has faced. His work in maintaining the integrity of Lakeside for South is immeasurable.”

“Martin has been a strong advocate for the Club’s re entry to top tier football and he has been at the forefront of our discussions with the FA on such matters. We cannot thank him enough.”

Mr Papastergiadis was equally impressed with Richard Marles’ understanding of South’s history in the pre-game speech Marles made.

Mr Papastergiadis said: “Richard Marles not only had an impressive understanding of South’s tremendous achievements, but equally he spoke with clarity and passion about the relevance of the Hellenic history of the club with its success.”

“Richard understood and appreciated the importance of migration and multiculturalism in the development of football in Australia. He is a strong advocate on these issues,” Mr Papastergiadis concluded.