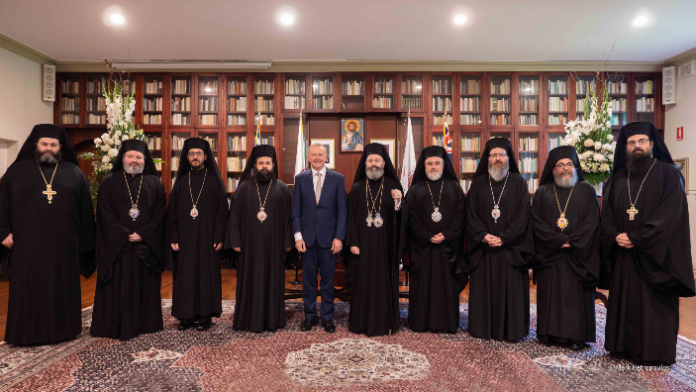 Federal Labor Leader, Anthony Albanese, paid a visit to the headquarters of the Greek Orthodox Archdiocese of Australia in Redfern, Sydney on Wednesday, November 17.

An official luncheon was held for Mr Albanese, which was attended by His Eminence Archbishop Makarios of Australia, His Grace Bishops Emilianos of Meloa, Iaokovos of Militoupolis, Elpidios of Kyaneon, Siluanos of Sinopis, Kyriakos of Sozopoleos, Christodoulos of Magnesia, Prochoros of Charioupolis, as well as the brother of Ecumenical Patriarch Bartholomew, Nikolaos Archontonis and his wife Catherine.

During the luncheon, special emphasis was given to issues related to the needs of Hellenism and the local Greek Orthodox church in Australia. Archbishop Makarios also presented to Mr Albanese the renovation plans for the Archdiocese and the new theological school.

Archbishop Makarios also stressed the need to reopen the Theological School of Halki, while also mentioning the 30th anniversary of the enthronement of Ecumenical Patriarch Bartholomew.

According to a press release from the Archdiocese, Mr Albanese expressed his willingness for closer cooperation with the Greek community and promised to contribute to the completion of the plans for the Archdiocese.

“Honoured to again meet with my dear friend, His Eminence Archbishop Makarios and the newly ordained Greek Orthodox Bishops from around Australia today in Sydney. Australia without our Greek community is unimaginable,” Albanese wrote on Twitter after the meeting.