Tension grows as Greece, France and Turkey have heated war of words 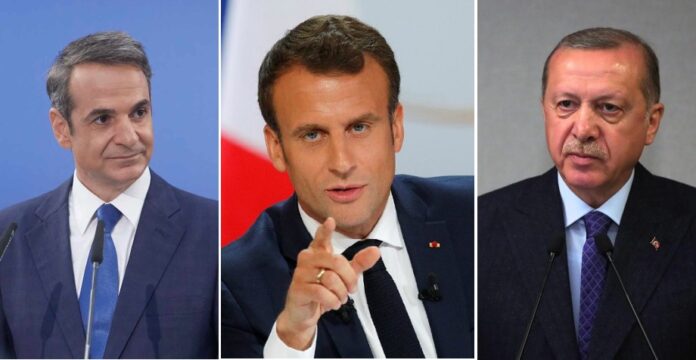 Over the weekend, Turkish President, Recep Tayyip Erdogan, attacked French President, Emmanuel Macron, saying that he needed mental treatment over his attitude towards Muslims and Islam.

The statement was made twice during Erdogan’s televised address in the central Anatolian city of Kayseri.

“What can one say about a head of state who treats millions of members from different faith groups this way: first of all, have mental checks,” Erdogan said in the first instance.

“What’s the problem of the individual called Macron with Islam and with the Muslims?” Erdogan added later. “Macron needs mental treatment.”

In response, France recalled its ambassador in Ankara, marking the first time such a move has been made.

“Such excess and coarseness on the part of Erdogan are unacceptable,” Macron’s office said in a statement on Saturday. “We demand that Erdogan changes the course of his policy because it’s dangerous.”

On Twitter, Macron wrote: “We will not give in, ever. We respect all differences in a spirit of peace. We do not accept hate speech and defend reasonable debate. We will always be on the side of human dignity and universal values.”

Greek Prime Minister, Kyriakos Mitsotakis, also joined in on the war of words on Sunday, expressing his solidarity with France’s President via Twitter.

In a post, he wrote that Erdogan’s “hate speech” is “unacceptable.”

France and Turkey are at loggerheads over a range of issues, including maritime rights in the eastern Mediterranean, Libya, Syria and the escalating conflict between Armenia and Azerbaijan over Nagorno-Karabakh.