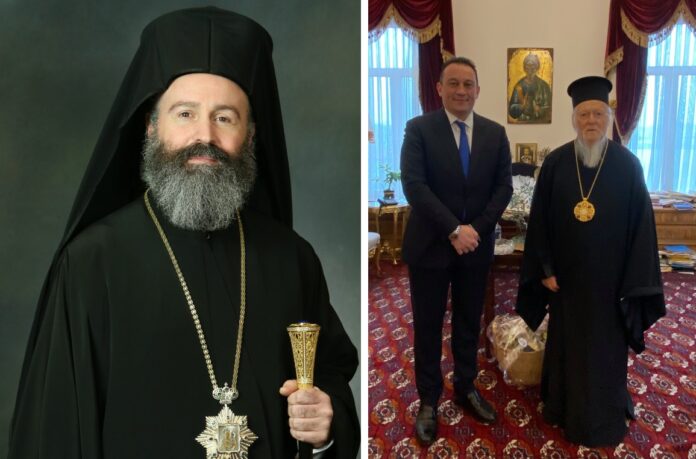 In the framework of his responsibilities for religious and ecclesiastical affairs, Mr Vlasis paid a visit to the city to attend the Enthronement of Metropolitan Geron Emmanuel of Chalcedon, as well as the patriarchal church service at Agios Georgios Greek Orthodox Church in Fanari on Orthodox Sunday.

During his stay in the city, Mr Vlasis also visited the Theological School of Halki and the Prinkipo Greek Orthodox Orphanage and could be heard saying: “The reopening of the School is a constant request of both the Ecumenical Patriarchate and Greece, as it is a beacon and monument of culture and history.”

The Bishop of Arabyssos guided Mr Vlasis through the facilities of the school including the library, which hosts a very rich collection of literature.

Afterwards, he attended the enthronement ceremony of the Metropolitan Geron Emmanuel of Chalcedon, in the presence of Ecumenical Patriarch Bartholomew at the historic cathedral of the Holy Trinity of Chalcedon.

Private meetings followed with the newly enthroned Metropolitan of Chalcedon, Archbishop akarios of Australia, Archbishop Elpidoforos of America and of course, with the Ecumenical Patriarch Bartholomew.

“Every meeting with him is a blessing, an honour and an inspiration. In difficult circumstances, the Ecumenical Patriarchate continues to be a beacon for the entire Orthodox world, a guardian of our faith and a source of enlightenment for every Christian,” Mr Vlasis said after the meeting.