Greek War of Independence: The liberation of Kalamata 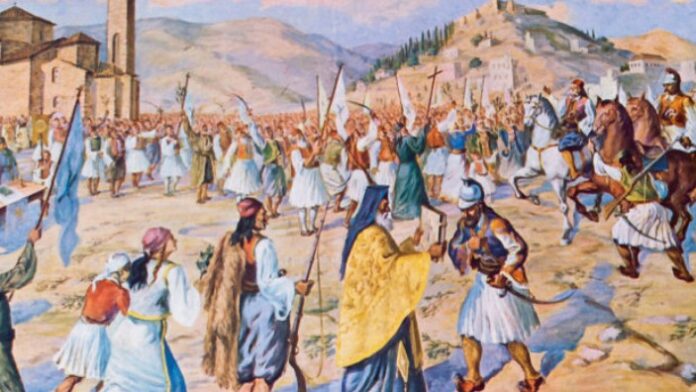 On this day in 1821, the Battle of Kalamata took place between the Greek revolutionary forces and the Ottomans. It was one of the first events of the Greek War of Independence which resulted in the capture of the city by the Greeks. Kalamata became the first city to be liberated.

To mark the day, we take a look back at the history of the battle.

In the middle of March, a ship loaded with ammunition, sent by the Friends of Smyrna, arrived at the port of Almyros, outside Kalamata. The Nikitas and Anagnostaras men carried the precious cargo to a safe place.

The Ottoman authorities of Kalamata are informed of the incident and, acting naively, ask the elite to learn about the contents of the cargo and why it is accompanied by armed men. They reply that the gunmen are villagers who accompany oil shipments for fear of robbers. The Suleiman of Kalamata, Arnaoutoglou, is convinced and asks for help from the people of Mani, who send 150 men to the city under Ilias Mavromichalis.

As of March 17, however, the nobles of Mani, under the leadership of Petrobei Mavromichalis, had raised the flag of the revolution in Tsimova, today’s Aeropolis of Laconia. The priest of the village swore and blessed the weapons of the captains and the unruly Maniates started the Revolution, eight days before its conventional start.

Immediately after, Kyriakoulis Mavromichalis and Giatrakos start for Mistras and Monemvasia, while Petrobeis Mavromichalis and Theodoros Kolokotronis with 2,000 men travel to Kalamata. Meanwhile, at the other end of the Peloponnese, is the first revolutionary action of the Struggle, with the siege of Kalavryta on March 21.

The Battle for Kalamata:

The people of Mania arrive outside Kalamata on March 22 and occupy the surrounding hills. Only then does Arnaoutoglou understand what is happening. It is too late to escape to Tripolitsa, as Kalamata is completely surrounded.

When the revolutionaries enter Kalamata on the morning of March 23, 1821, Elias Mavromichalis asks Arnaoutoglou to surrender, emphasising the futility of his effort.

Indeed, Arnaoutoglou hands over the city and the Turkish armament to the revolutionaries by protocol. At noon, in front of the church of Agios Apostolos and in a festive atmosphere, the priests bless the flags and swear allegiance to the fighters.

This was followed by a meeting of the chiefs, who decided to set up a revolutionary committee, which they named the “Messinian Senate,” to better coordinate the struggle. Its leadership was assigned to Petrobei Mavromichalis, who bore the title of General of the Spartan and Messinian army.

On the same day, the “Messinian Senate,” with its Proclamation to the European public, announces that the Greeks rose up for their freedom.