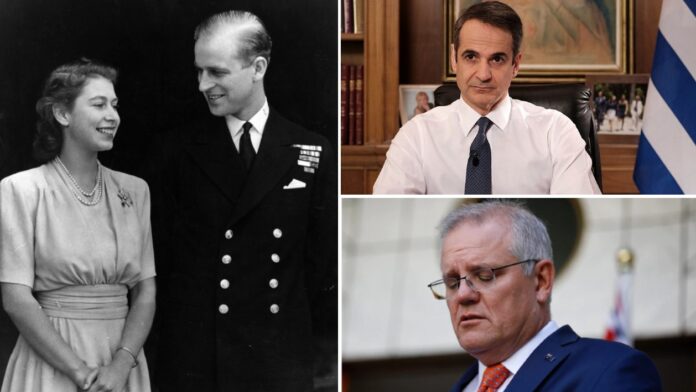 World leaders have sent their condolences to the royal family following the tragic loss of Prince Phillip, Duke of Edinburgh, who passed away Friday night at the age of 99.

Prince Philip served as consort to his wife Queen Elizabeth II for more than 60 years, passing away peacefully at Windsor Castle.

“The royal family join with people around the world in mourning his loss,“ Buckingham Palace said in a statement.

Australian Prime Minister Scott Morrison released a statement following his death, announcing that Flags will be lowered in honour of His Royal Highness.

“Prince Philip was no stranger to Australia, having visited our country on more than 20 occasions,” Mr Morrison said.

“Through his service to the Commonwealth he presided as patron or president of nearly 50 organisations in Australia. Given his own service, Prince Philip also had a strong connection with the Australian Defence Force.”

In 2015, Prime Minister Tony Abbott awarded Prince Philip Australia’s highest honour, a Knight for the Order of Australia, for his life of service during the Queen’s reign.

“Australians send our love and deepest condolences to her Majesty and all the Royal family. The Commonwealth family joins together in sorrow and thanksgiving for the loss and life of Prince Philip. God bless from all here in Australia.”

Prime Minister Kyriakos Mitsotakis expressed his condolences over the death of Prince Philip by sharing a photo of his letter to Queen Elizabeth II on Twitter on Friday.

“On behalf of the people of Greece, I would like to extend our deepest condolences to her Majesty the Queen and the Royal Family on the sad news of the passing of Prince Philip, Duke of Edinburgh,” began the statement.

“His Royal Highness gave dedicated service to the Crown, the United Kingdom, and the Commonwealth over many decades. His contribution to public life, to the charities he served, and his work with young people, will be great missed,” it concluded, praising the expansive public presence of the royal consort.

Philip was born in Mon Repos on the Greek island of Corfu on June 10, 1921, the only son and fifth child of Prince Andrew of Greece and Denmark and Princess Alice of Battenberg.

Other Commonwealth leaders, including New Zealand Prime Minister Jacinda Adern and Canadian Prime Minister Justin Trudeau, sent their condolences to the royal family, saying the late Prince was a “man of great purpose and conviction”.

U.S. President Joe Biden recognised Prince Philip as a man who “saw our world change dramatically and repeatedly” during his lifespan.

“The impact of his decades of devoted public service is evident in the worthy causes he lifted up as a patron, in the environmental efforts he championed, in the members of the Armed Forces that he supported, in the young people he inspired, and so much more,” said Biden.

In Britain, the flag at Buckingham Palace, the Queen’s residence in London, was lowered to half-mast after the announcement of Philip’s death. The Royal Family’s website featured a black-and-white portrait of the prince while the BBC interrupted scheduled programming to broadcast the national anthem, God Save the Queen.