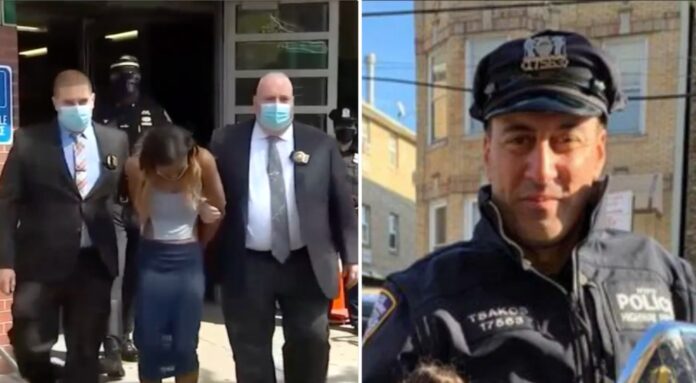 The woman charged with the hit-and-run death of an NYPD officer made a brief court appearance in Queens Tuesday after she was indicted by a grand jury earlier this month.

No bail has been set for Jessica Beauvais as she faces a 13-count indictment in the hit-and-run death of NYPD officer Anastasios Tsakos.

Tsakos, 43, was directing traffic on the Long Island Expressway after an earlier car accident when police said he was struck and killed by a 2013 Volkswagen driven by Beauvais.

Police say Beauvais told investigators she was drinking before she got behind the wheel of her car last month. After police caught up with her, she blew a .15 on the breathalyser.

In court, Beauvais’ lawyer entered a not guilty plea. Her parents, siblings and 13-year-old son were inside.

On the other side of the room, sat the parents of Officer Tsakos.

“Imagine the plans you had for your children later on that day and you never come back to do it. Well, that’s how they feel, but what scares them most is that they know it will never end, sir, they know the pain will never go away regardless of what happens in this courtroom.”

Officer Tsakos’ fellow motorcycle cops also showed their support. There was no comment from Beauvais’ attorney or family.

If convicted, she faces 15 years in a state prison.