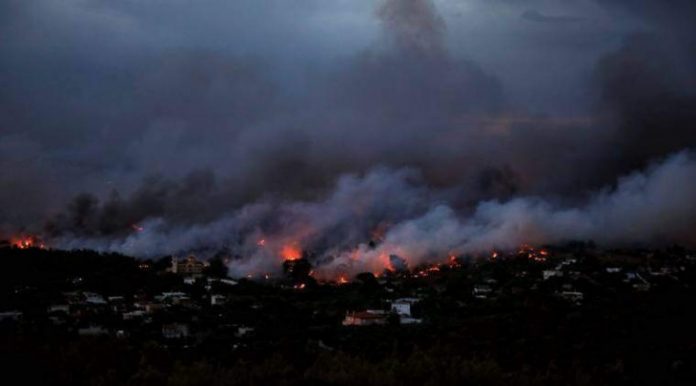 Greece’s Civil Protection on Saturday afternoon warned locals to evacuate the wider area around the village of Nimborio in southern Evia due to a raging wildfire burning forestland in the area.

Authorities send an emergency message though the European Emergency Number 112 to inform all residents to move further south, towards the towns of Marmari and Karystos.

A force of 64 firefighters with 3 groups on foot and 23 vehicles were deployed along with five helicopters and five aircraft, of which 4 are Canadair and one is a BERIEV-200.

“The situation is nightmarish despite the fight we are giving from the air and on the ground. The front [of the fire] is big,” Karystos Lefteris Raviolos told the state-run news agency ANA-MPA.

He said winds in the area measured 6 to 7 on the Beaufort scale.

In an emergency press briefing on Saturday afternoon, Deputy Minister for Civil Protection Nikos Hardalias said a total of 51 fires broke out since daybreak, with the most serious being the one in Evia. He added, however, that there was currently no risk to homes and infrastructure.

A total of 56 fire fighters, two teams on foot, the motorised fire brigade team METPE, a helicopter, two airplanes and municipality water trucks have been deployed in Aspropyrgos and police have suspended traffic on Zoodochos Pigis Avenue in Aspropyrgos from NATO Avenue to the Papastratos factory and the Elefsina-Dervenochoria road from the Kanaki factory.

Fire-fighters are battling at least five seperate wildfires in Greece on Saturday, some of which started on Friday.