Golden Angels: The Greek Australians who ‘spread their wings’ over sick kids and their families 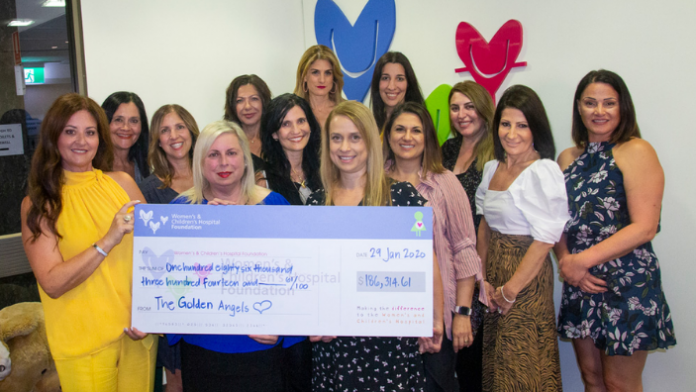 Nothing changes if nothing changes goes the saying and a group of Greek Australian women with the name ‘Golden Angels’ are committed to making a difference in the lives of children in palliative care and their parents.

“Petroula Gekas and I heard that the government stopped supporting kids in palliative care and we wanted to do something about this,” Founder of Golden Angels, Vicki Antoniou, told The Greek Herald.

And so, they did.

The two ladies organised the first High Tea in 2014 and the event was supported by nearly 380 members of South Australia’s Greek and wider community.

“After the first year Petroula left due to work and family commitments and it was my husband’s idea to put a committee together,” says Vicki.

“We are now 13 women who work voluntarily and give up our time to support those children but I always say we are 14, because we have Panayia (Virgin Mary) looking over us.”

Due to the group’s collective efforts the latest High Tea held in November 2019 was attended by more than 1000 people and raised over $186,000.

“We work in collaboration with the Women’s and Children’s Hospital Foundation to support children who are being cared for by the palliative care service and their parents in all aspects of their life including funeral costs, equipment for home use to enable the child to remain at home longer, and transportation assistance so that a parent can travel with the sick child,” says Vicki.

Making an impact in the community

With the funds raised during the years the Golden Angels have funded and contributed to essential programs to shine some light in the lives of children and families who need it the most.

“We are in awe of the Golden Angels ability to rally the Greek community in support of some of our community’s sickest children and their families. The funds raised by the group’s fundraising efforts have made a significant impact on families whose lives are devastated by illness,” said Jane Scotcher, Chief Executive of Women’s and Children’s Hospital Foundation (WCHF).

“They have funded key projects such as equipment enabling children to be cared for in their homes, funded an art therapist, supported funeral expenses and were major contributors in the development of the Laklinyeri Beach House Program at Victor Harbor, a specially designed holiday home for families to have a much-needed holiday – sometimes their last as a family.”

Although the pandemic has paused big gatherings and events, the Golden Angels continue to work tirelessly and selflessly behind the scenes towards their next project.

“Our vision is to build a hospice facility for palliative care children in South Australia as the state doesn’t have one but at the moment, we focus on creating a more spacious and comfortable space for these kids and their families at Adelaide’s new Women’s and Children’s Hospital,” Vicki says.

“We know we are working for a reason. We are helping palliative care children and their families and this is really a great thing. Something exceptional,” she says proudly.

“I often say, ‘we cannot change the journey for these families, but we can certainly make it easier’ and the Golden Angels help to make that possible,” Jane Scotcher concludes.