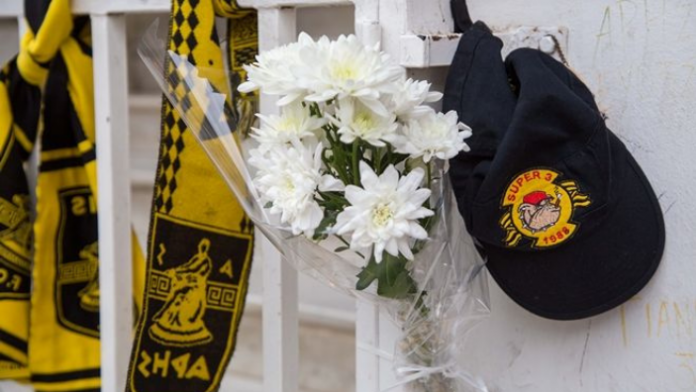 Greek Police have recovered a weapon they believe was used to kill a 19-year-old student early Tuesday morning in a district of Thessaloniki, northern Greece.

Ekathimerini reports that the murder weapon, a sickle, was discovered by locals a few meters away from the crime scene, next to a garbage bin.

According to initial reports, the victim, Alkis Kambanos, along with two friends, were intercepted and attacked on the street in Harilaou around 1 am by several people riding in two cars.

The 19-year-old bled to death after being stabbed in the upper thigh. The other two are being treated for multiple injuries at the Papanikolaou Hospital.

According to reports, one of the attackers made a reference to a local soccer team before launching into the assault, leading investigators to believe the incident is linked to rival fan clubs.

Police sources believe at least 10 people were involved in the attack.

Greek Prime Minister, Kyriakos Mitsotakis, expressed his abhorrence of the teen’s murder during a conversation with MPs on the sidelines of a meeting with party officials in Thessaloniki on Tuesday.

Mitsotakis contacted Citizen Protection Minister, Takis Theodorikakos, asking him that priority be given to the investigation of the crime.

Kambanos was a first-year student at the School of Economics and Political Science of the Aristotle University of Thessaloniki.

The rector at the university, Nikos Papaioannou, has condemned the attack.

“Nineteen-year-old Alkis had his whole life ahead of him. He came to our university to make his dreams come true. Instead, he fell victim to blind fan violence. We are all devastated and we condemn in the most categorical way this heinous event,” Papaioannou said.