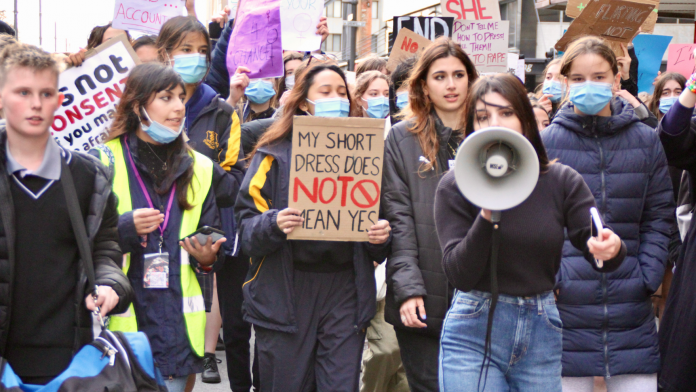 Hundreds of Adelaide high school students, girls and boys as young as 14 years old, among them Greek Australians, marched from Victoria Square to SA Parliament earlier today to protest against sexism and sexual violence, demanding immediate change towards a better sexual consent education.

The march was organised by Adelaide Youth Against Sexual Violence and the Adelaide High School Call4Action group and was supported by Justice4WomenSA.

“We are here to protest for better consent education due to the unacceptably high cases of sexual assault within Australian schools,” Adelaide High School Student and Call4Action school group co-founder, Sophia, told The Greek Herald.

Speaking at the march was former federal Labor MP and author of the book ‘Sex, Lies and Question Time’, Kate Ellis.

“It is so appalling to me, and unacceptable that you feel you are not safe in your schools,” Ms Ellis said.

Co-Founder of the Adelaide High School Call4Action group, Martha, told The Greek Herald that sexual violence impacts everyone and can be also prevalent for people of colour and students from Culturally and Linguistically Diverse (CALD) communities.

“Culture is a big factor on whether someone is educated about sexual violence and assault. You may not be getting this education at home so it’s important we all get it at school,” Martha, said.

“I want to make sure people can talk about it and stand up against it.”

A Change.org student petition calling for an end to sexism and sexual assault at Adelaide High School has attracted more than 7000 signatures while consent campaigner Chanel Contos is working with the Adelaide High students to stage a much larger national march in August.