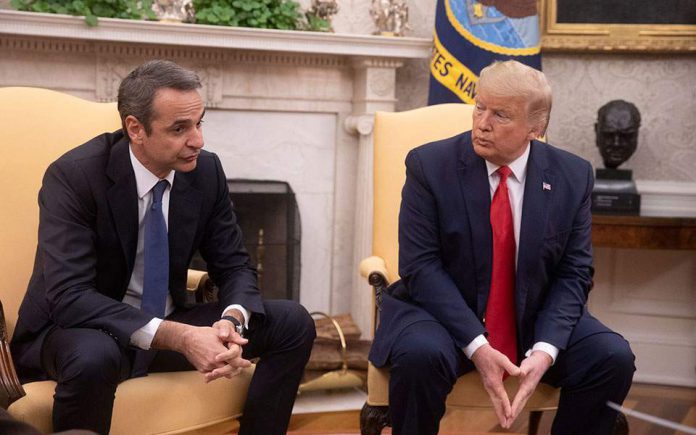 Greek Prime Minister Kyriakos Mitsotakis spoke with US President Donald Trump over the migration crisis evolving on Greece’s borders with Turkey, a statement from the Greek premier’s office said on Monday.

Trump, the statement added, “recognized the right of Greece to enforce the law on its borders.”

The statement comes as Turkish President Recep Tayyip Erdogan warned on Monday that soon the number of refugees crossing into Europe “will reach millions” unless the European Union takes responsibility for the crisis.

Greece has continued efforts to fortify its borders and diplomatic initiatives to tackle what it calls an “asymmetrical threat.”

On the diplomatic front, the government’s initiatives have led to a planned visit on Tuesday to the Greek-Turkish border in Evros by the presidents of the European Commission, Council and Parliament – Ursula von der Leyen, Charles Michel and David Sassoli – accompanied by Prime Minister Kyriakos Mitsotakis.

On Sunday, Greece announced emergency measures to tackle the crisis, including a further tightening of border controls to the maximum level, a temporary one-month suspension of asylum applications and the immediate return of undocumented migrants to their country of origin.

Meanwhile a military exercise with live ammunition was held in the Evros River border region by Greek army units on Monday, with the aim of sending out a message that Greece will not allow its national borders and security to be violated.