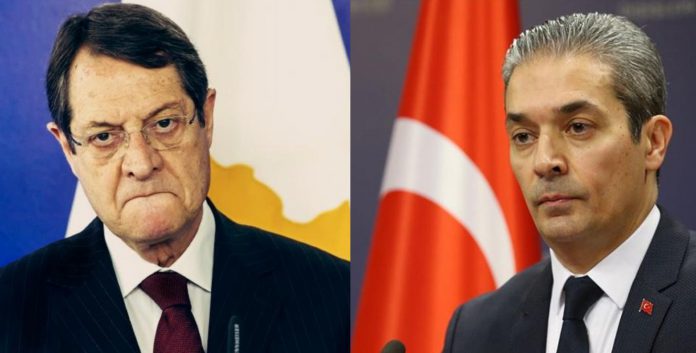 Borrell’s proposal called for cooperation between the Republic of Cyprus and Turkey and welcomed Nicosia’s offer to Ankara to negotiate in good faith the maritime delimitation between their relevant coasts.

In response, Hami Aksoy, spokesman for Turkey’s Ministry of Foreign Affairs, said “the proposal was far from being serious” and was made by the same EU “which always ignores the existence of the Turkish Cypriots and has never referred to their equal rights over the natural resources of the Island in any of its statements.”

Aksoy also reiterated that until the Cyprus issue on hydrocarbon resources is resolved, the interlocutor of the Greek Cypriots is the Turkish Cypriots.

He said that in this context, interlocutor of the Greek Cypriot administration’s Foreign Ministry is not Turkey but Foreign Minister of the Turkish Republic of Northern Cyprus (TRNC), Kudret Ozersay.

“If a solution is desired in the Eastern Mediterranean, as a first step, the two peoples of the Island should come together and establish a joint cooperation mechanism for the exploration and exploitation of the hydrocarbon resources, including revenue sharing, as soon as possible,” Aksoy said.

“Turkey itself will never sit down with the Greek Cypriot Administration ever which has usurped the title of Republic of Cyprus and does not represent the Turkish Cypriots.”

He concluded that the limitation of maritime jurisdiction areas in the west of the Cyprus Island is possible only after the Cyprus issue is resolved.