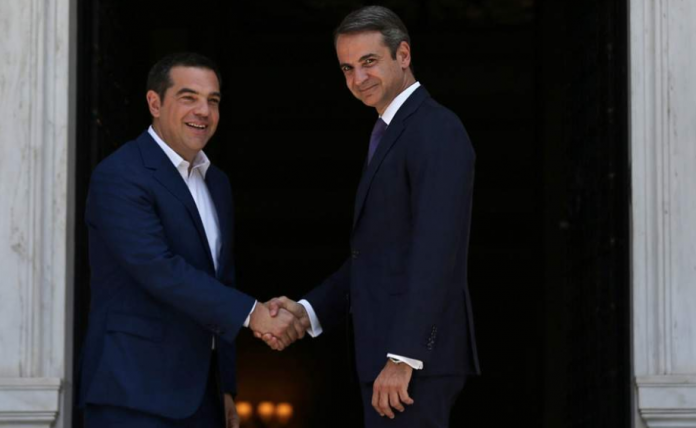 The Greek Herald looks back at the most significant moments for the Australian community, the Greek community and the global community during 2019.

On Friday, January 25, with 153 votes in favour, the Greek Parliament ratified the Prespa Agreement, officially recognising Skopje as “Northern Macedonia”.

Publisher, businessman and beloved father, Theo Skalkos, passes away on February 19th. He leaves behind him a legacy that will continue in the pages of The Greek Herald for as long as it remains.

On March 15th, two consecutive terrorist attacks occurred at mosques in Christchurch, New Zealand. One single Australian terrorist executed the acts, which killed 51 people and injured 49. The event was one of the deadliest mass shootings in modern New Zealand history.

On March 25th, 2019 His Eminence Archbishop Stylianos passed away, succumbing to his illness after years of battling with cancer. The Archbishop maintained the role as leader of the Greek Orthodox Archdiocese of Australia for over 40 years.

A structure fire broke out on April 15th 2019, at the iconic Notre Dame Cathedral in Paris. The building’s spire and most of its roof had been destroyed and its upper walls severely damaged. On 25 December 2019, the Notre Dame Cathedral did not host Christmas services for the first time since the French Revolution.

On 21 April 2019, Easter Sunday, three churches in Sri Lanka and three luxury hotels in the commercial capital Colombo were targeted in a series of coordinated terrorist suicide bombings. At least 253 people were killed, including two Australians, and 485 people were injured. Sourced via CNN.

North Korean leader Kim Jong Un and Russian President Vladimir Putin pass by guards during a meeting in Vladivostok, Russia. It was their first-ever meeting, and it came two months after talks between Kim and US President Donald Trump ended abruptly without an agreement. Sourced via CNN.

May 2019 – Dimitris Gogos, the founding publisher of Neos Kosmos, passes away

May 2019 – Arthur Sinodinos appointed as next Australian ambassador to the United States.

Senator Arthur Sinodinos will assume the role of Australian Ambassador to the US, in Washington, from the beginning of 2020.

May said she deeply regretted not being able to deliver Brexit, the issue that brought her to power in 2016 and consumed her premiership. The UK parliament voted to approve Johnson’s Brexit deal, setting up the country for a 31 January departure.

People march in the streets of Hong Kong to protest a controversial extradition bill. Critics feared the bill would allow citizens to be sent across the border into mainland China. Hong Kong Chief Executive Carrie Lam withdrew the bill on September 4, but she refused to give ground on protesters’ four other demands, which include greater democracy for the city and an independent commission into police conduct. The protests caused havoc in Hong Kong for the majority of 2019. Sourced via CNN.

His Eminence Archbishop Makarios officially arrived and commenced his role as the new Archbishop of the Greek Orthodox Church of Australia.

The bodies of Salvadoran migrant Oscar Alberto Martínez and his nearly 2-year-old daughter, Angie Valeria, lie on the bank of the Rio Grande near Matamoros, Mexico. They drowned trying to cross the river to Brownsville, Texas. The shocking image was a grim reminder of the dangerous journey migrants take to get to the United States. Sourced via CNN.

US President Donald Trump shakes hands with North Korean leader Kim Jong Un as the two meet at the Korean Demilitarized Zone. Trump briefly stepped over into North Korean territory, becoming the first sitting US leader to set foot in the nation. Trump said he invited Kim to the White House, and both leaders agreed to restart talks after nuclear negotiations stalled. Sourced via CNN.

On 7 July 2019, Kyriakos Mitsotakis was elected Prime Minister of Greece. The New Democracy gained 158 seats in the Hellenic Parliament, and had a majority of the seats. This meant that the left-leaning SYRIZA party was sworn out of leadership.

A freak hailstorm hit the popular destination of Chalkidi, killing at least seven people and injuring over 100 others.

During June, July and August 2019, the Greek islands saw the highest influx of refugees since the 2015-2016 EU Migrant Crisis. Moria hotspot, the largest refugee hotspot in Lesvos, had reached a over 13,000 inhabitants. Its capacity has been declared adequate for 3000.

This aerial photo shows part of the burned Amazon rainforest in Brazil’s Mato Grosso state. Every year, farmers in the Amazon clear out areas so their cattle can graze. But this year’s fires were way up over last year, and that has raised concern about what it means for the health of the planet. Sourced via CNN.

On the 9th of September 2019, Machairitsas suffered a heart attack during his sleep. He was transferred to the hospital of Volos, where he was pronounced dead.

The Greek Prime Minister attended the UN General Assembly on September 25th and was invited to a reception hosted by US President Trump. The Greek PM also had discussions with President of Turkey, Erdogan.

Swedish climate activist Greta Thunberg watches US President Donald Trump as he enters the United Nations to speak with reporters. Thunberg, 16, didn’t mince words as she spoke to world leaders during the UN Climate Action Summit. She accused them of not doing enough to mitigate climate change: “For more than 30 years, the science has been crystal clear. How dare you continue to look away?” Trump later mocked Thunberg on Twitter. Sourced via CNN.

The PM pointed out close economic ties between the two nations, while Pompeo noted the role of Greece as a pillar of stability in the wider region and added that the US companies are ready to invest in Greece

The bankruptcy of one of the UK’s largest travel companies and airlines was a shock for Europe. A number of tourists were stranded in Greece waiting to be repatriated, which has anticipated to have an impact on Europe’s tourism for 2020.

Greece, North Macedonia and Albania drastically improve relations as Greece supports the entry of the Balkan countries into the European Union.

Student protests increased in Greece when the new government proposal to remove the “asylum law”, which bans police from entering university grounds. This law was created as a response to the 1973 ‘Athens Polytechnic Uprising’, which saw the murder of over 24 protesting students by police and military on November 17th.

A deadly earthquake in Albania claimed at least 21 lives and injured hundreds.

Greek Prime Minister Mitsotakis visited China in November, and a week later Chinese President Xi Jinping visited Athens. The two countries signed 16 deals, including an extradition treaty and investment agreements. The Port of Piraeus and China’s support for the return of the Parthenon marbles were also points of discussion. The Chinese President labelled Greece a “model of Sino-European cooperation”.

A number of amendments were made to the Greek constitution, including Greeks living abroad being able to vote in Greek elections and changes to the election process.

Greek police released 40 migrants from a container truck near the town of Xanthi in north-eastern Greece.

The UNHCR Chief, Filippo Grandi, visited the refugee hotspots in Lesvos, including Moria, and deemed the experience “extremely disturbing”.

Mr Arthur Spyrou has been appointed as Australia’s next Ambassador to Greece. Mr Spyrou will also be accredited to Bulgaria and Romania.

Upon the initiative of Prime Minister Kyriakos Mitsotakis, who had met him in the past, Hanks and his family received honorary Greek citizenship. The decision was signed off by President Prokopis Pavlopoulos.

The signing of a maritime agreement between Turkey and Libya, which Greek says breaches international law by overriding a number of Greek islands including Crete, has brewed further tension between Greece and Turkey. A number of diplomatic turmoils occurred from this decision, including the dismissal of the Libyan Ambassador to Greece, and Greece’s attempt to create a “diplomatic shield” against Turkey, by creating official diplomatic agreements with a number of neighbouring countries and global superpowers. There are now talks Greece will take matters to the International Court of Justice.

15 people died in New Zealand, after a volcano explosion, including a young Greek-Australian woman.

House Speaker Nancy Pelosi bangs the gavel after the House voted to impeach US President Donald Trump. The House voted almost entirely along party lines to charge Trump with abuse of power and obstruction of Congress. Sourced via CNN.

One of the most influential Greek composers of recent decades, Thanos Mikroutsikos passed away on December 28th, after losing his battle with cancer.

Australia grapples with some of the worst bushfires the country has seen. A number of homes have been destroyed, while landmarks have come under threat including the The Holy Monastery of Panagia Pantanassa in Mangrove Creek NSW. While three firefighters, Samuel McPaul, Geoff Keaton and Andrew O’Dwyer have lost their lives.