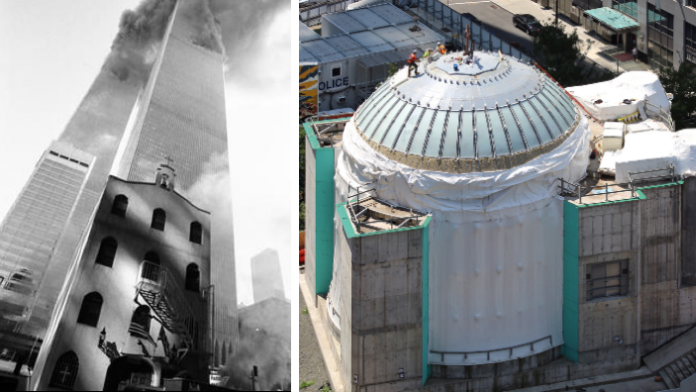 Vespers will be performed at the Greek Orthodox Church of St Nicholas in New York, which was destroyed in the terrorist attacks of September 11, 2001, for the first time in 20 years.

This news was confirmed by the General Hierarchical Vicar of the Greek Orthodox Archdiocese of America, Father Alexandros Karloutsos, to the Sputnik news agency.

“On September 10, the Vespers will be officiated by Archbishop Elpidophoros of America. This is our contribution to the anniversary of 9/11,” Father Karloutsos added.

The next day, the church will be lit, along with other buildings in the area, in blue to honour the memory of the victims of the terrorist attack.

READ MORE: St Nicholas Greek Orthodox church to be illuminated ahead of 9/11 anniversary.

The domed shrine, which is covered in the same type of marble used to build the Parthenon in Athens, is supposed to appear as if it’s glowing from the inside.

The shrine will then go dark again for the next few months.

A year ago, the Greek Orthodox Archdiocese of America said the shrine would be finished by this fall. Archbishop Elpidophoros, who heads the church in the US, said “it will be completed and open to all people, on the 20th anniversary” of 9/11.

READ MORE: Exterior of shrine at Saint Nicholas Greek Orthodox Church to be ready by September 11.

But Michael Psaros, the vice chairman of the Friends of St Nicholas, told euronews the exterior of the church is expected to be completed by November 2, when the doors will be opened in the presence of the Ecumenical Patriarch Bartholomew.

Mr Psarros added that work on the interior of the church will continue until April 2022, with the hope that it will be finalised by Holy Week and Easter of the same year.

“The church will be inaugurated on July 4, 2022, to coincide with the 100th anniversary of the founding of the Greek Orthodox Archdiocese of America,” Mr Psarros concluded.

READ MORE: Exterior of Saint Nicholas Shrine glows after being clad with same marble as the Parthenon.