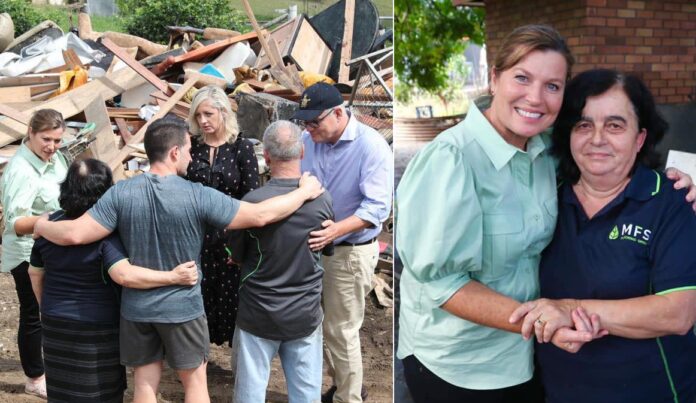 Australian Prime Minister Scott Morrison made a special trip to the Magnisalis family, who lost their home and almost all their possessions, as the cleanup process gets underway across NSW.

The Prime Minister was joined by his wife Jenny in visiting some of the flood affected areas of Western Sydney yesterday.

One of families visited by Mr Morrison was Nick and Irene Magnisalis, who lost their dream home built 47 years ago in the Hawkesbury region, along with many of their possessions.

“They’ve lost almost everything, but the way their whole family has gathered together, working day and night on the cleanup, shows they have built something really special that even floodwaters can’t take away,” the Prime Minister said in a statement.

Talking on Sunrise last week, Peter Magnisalis describes how much the home they’ve now lost meant to them.

“It’s their pride and joy. It’s their little castle and that’s all they’ve got. They’ve got their house and they’ve got us… You can’t replace it.”

Mr Morrison said while the scale of the devastation is immense, he’s confident in Australians to come together and “support each other in times of need”.

The Prime Minister met and personally thanked some of the SES and RFS volunteers with local MP Melissa McIntosh.

“These amazing volunteers have been helping with everything from leaking roofs to flood rescues, and now the all important recovery.”

The Federal Government announced further support for small businesses devastated by the floods, totalling $52 million, to affected families of $1000 for adults and $400 for children.

The government has also deployed more than 500 ADF personnel to assist with the clean-up.

“There’s a long, hard road ahead, but we’re committed to helping the communities affected by these record breaking floods and we will stand with them as they recover and rebuild,” Mr Morrison concluded.