Photographer, Nick Bourdaniotis, on ‘getting the shot’ and being part of the Evzones family 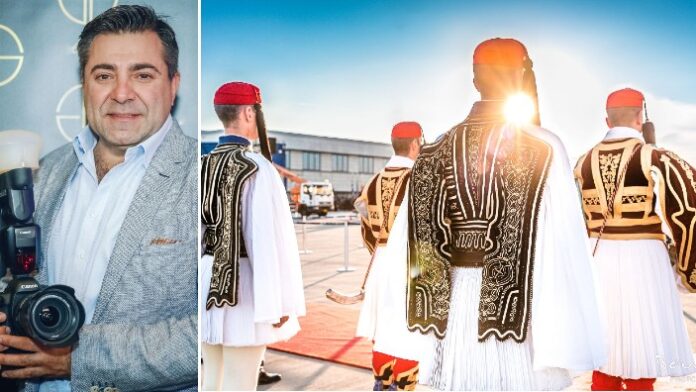 When you meet Nick Bourdaniotis, you can tell he’s funny, confident and passionate about photography – or as he likes to call it, ‘getting the shot.’ But as Nick reveals to The Greek Herald, this passion wasn’t as strong when he was young boy growing up in Nambour, Queensland.

“When I was young, my mum would always give me the camera at family functions because she said I took the best photos… and I thought nothing of it,” Nick tells The Greek Herald.

“Then when I was 21, one of my first cousins offered me all of his camera equipment. Back then it was all film not digital and he said to me, ‘Did you want my old cameras? I’m upgrading.’ I looked at the cameras and I said, ‘no, it’s not my time,’ and I gave them back to him.”

Nick’s ‘time’ to shine finally came when he decided to buy his first professional camera in 2014 and began photographing events for major clients such as St Spyridon College.

“In business, you don’t do something halfway. When you go to do it, you do it properly. So I went out and bought a camera that could have dual cards. If you lose one card, you’re always going to have a backup,” Nick says.

Luckily for Nick, doing things ‘properly’ meant he reaped the benefits just one year later in 2015, when a photo he took of St Spyridon College students at Sydney’s Greek Independence Day parade on March 25 went viral.

The ‘hero shot’ captured the students walking into the forecourt of the Sydney Opera House carrying Greek and Australian flags, led by a group of Caryatids and with the Sydney Harbour Bridge in the background.

“I foresaw the photo… and that photo will never repeat again because the following year, they totally moved the dynamics of the forecourt,” Nick explains.

Despite this, Nick was still able to pull off a second viral photo the following year at another Greek Independence Day parade in Sydney. This time around, he photographed students carrying a large Greek flag down into the forecourt of the Sydney Opera House, with the Sydney Harbour Bridge and Opera House sails in the background.

“The second photo was when people were recognising me again and thinking, ‘hang on, this guy is not just a one-hit wonder,” he says.

This recognition saw Nick later earn the title of Greek City Times’ Director of Photography and Videography, and he has also photographed for the My Greek Odyssey TV travel show in Greece, as well as the Greek Orthodox Archdiocese of Australia.

Becoming a part of the Evzones family:

When Nick’s not doing all of the above, he’s also lucky enough to be able to photograph the Greek Presidential Guard (the Evzones).

“The first time I ever shot an Evzona was at St Spyridon parish office. They got ready and came out and I took this one shot where they were all just standing there. It was a hero shot,” Nick says proudly.

But in between shooting the Evzones in Australia, Nick was also making frequent trips to Greece where he began to form a stronger relationship with the Evzones. In fact, during one overseas trip with the team from My Greek Odyssey, Nick received official permission to attend the ‘raising of the flag’ ceremony, which is performed by the Evzones at the Acropolis every Sunday and is not open to the public.

“We were all gobsmacked. It was the true essence of being Greek. It was just us and them and… it was just before 8am, just before the church bells rang, and it was dead silent. That’s where I feel in love and went, ‘wow this is something special’,” he explains.

The photographer was so in love that he returned multiple times to Greece to photograph the Evzones and in time, he began to feel as though he was a part of their family.

“I didn’t sit there like I was being an idol or stalker. It flowed… I was never obsessed with them. The gates would always open for me to take photos of them. I am part of their family now and they always welcome me with open arms,” he says.

Turning his passion into an exhibition:

With such a clear passion for the Evzones, it’s no surprise then that in mid-2018, Nick decided to open an exhibition featuring some of the photographs he’d taken of them.

“I went to a photo festival of a photographer in Sydney and after seeing his amazing work, I was then intrigued to think, ‘I should do an exhibition myself.’ And then it came to me – [I could do] an exhibition of the Evzones,” Nick says.

This decision set in motion a sequence of events. Nick returned to Greece in 2019 to photograph the Evzones for the last time and prepare everything for his exhibition. He was ready to open the exhibition in Sydney by March 2020 but sadly, the COVID-19 pandemic struck.

“I had printed the exhibition. We were ready to go. We were nine days out before COVID hit and then I had to pack it all away and put it in the corner of my house… I was devastated,” Nick reminisces.

“I even set up eight photos in my house and I was inviting my family and friends to come and have a look. That’s how much it got to me. I was itching to show the world.”

But in a positive turn of events, Nick is now getting his chance to show the world his photographs this year, with a nationwide Evzones exhibition to mark the 200th anniversary of the Greek War of Independence.

‘The Evzones Collection: By Nick Bourdaniotis’ has over 28 beautifully selected photos capturing and portraying the Evzones in a truly remarkable light. It will be travelling across Australia and after having already seen it on display in Canberra, it’s definitely not going to disappoint all those who’ve waited patiently to see Nick’s photographs in the flesh.

The exhibition will run across Australia on the following dates in 2021 and entry is free: