‘Righteous Among Nations’ heroes honoured in street mural in Patras 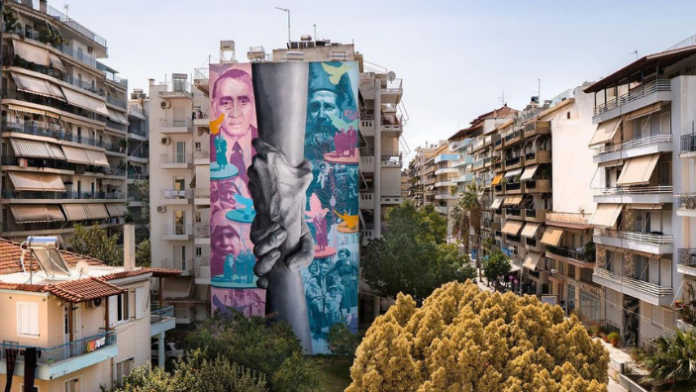 A street mural in Patras, Greece has been enacted to honour two non-Jewish Greek citizens recognised by Yad Vashem as “Righteous Among the Nations” for saving Jews during the Holocaust.

The art display pays tribute to the late Zakynthos Lucas Carrer and Greek Orthodox Metropolitan Dimitrios Chrysostomos, who protected Jewish residents on the Greek island of Zakynthos after the Nazis occupied the island in 1943.

The artwork was done by Kleomenis Kostopoulos, the creative director of the Patras-based group Art in Progress, as a part of the ‘Artists 4 Israel’ initiative that the group is running in partnership with the Combat Antisemitism Movement.

“Murals are one of the most important forms of contemporary expression and communication in public spaces,” said Kostopoulos.

“Today, more than ever, we must revisit our history in Greece by bringing it to the streets and putting it in their faces,” he continued.

The initiative includes one other artwork that was painted last year in the north of Portugal. As a whole, the project aims to honour Non-Jews around that world that rescued Jews in the second World War.