TGH Exclusive: Steve Georgallis – The man planning to turn the Bulldogs back into a competitive side 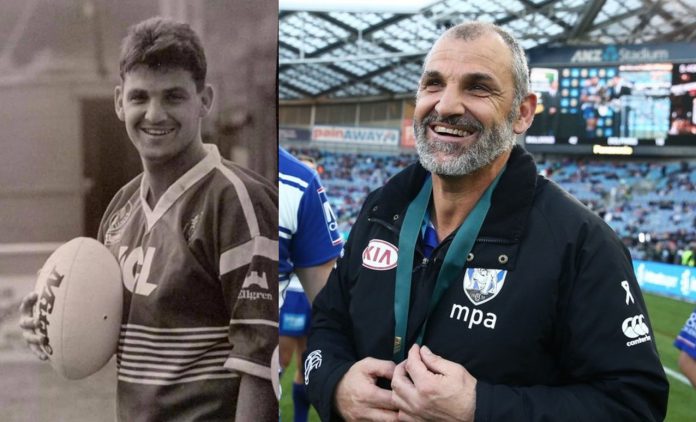 With one win in ten games, it’s safe to say that the Canterbury-Bankstown Bulldogs have had a rough start to the season. As a result of the unsatisfactory start, the club recently announced the resignation of former head coach Dean Pay.

Yet, where one man steps down, another rises to the platform. Steve Georgallis, formerly the team’s assistant coach, assumed the role as interim head coach following the resignation of Pay.

Speaking exclusively with The Greek Herald, Georgallis shares his plans to bring the team back to winning form.

“It’s obviously been very hard with the injuries that we’ve had with senior players, but our discussions this week revolve around simplifying what we’re doing and going back to basics,” Georgallis says.

“Not putting the pressure upon us to score points but using those basics to try and get us back where we need to be.”

Guiding the Canterbury reserve grade side to the Intrust Super Premiership NSW and the NRL State Championship, the Greek Australian coach certainly has a history in bringing trophies home to Belmore.

While currently standing in an interim position, Georgallis looks to prove he is the man for the NRL coaching job.

“Those jobs are far in between and if you have the opportunity to coach for an Australian Rugby League team, regardless of what’s happened before you, you take it with both hands,” Georgallis says.

Steve Georgallis was brought up in the Canterbury area his entire life. Despite not playing professionally for the Belmore side, Georgallis played rugby league as a Canterbury junior, later spending majority of his junior career at the St George Illawarra Dragons.

Prior to his NRL career, the junior player looked up highly to former Greek hooker George Peponis, who spent his entire career with the Bulldogs, earning them a Premiership in 1980.

“Growing up he was a very influential person playing the game. A player, I suppose, a lot of Australians with Greek heritage grew up with and knew quite well.

“So he kind of paved the way for players like us with Greek heritage who wanted to play the game.”

Georgallis went on to play for multiple clubs, spending majority of his professional career with the Eastern Suburbs Roosters and Western Suburbs Magpies.

Following his success in the NRL, he studied at ACP college and became a teacher, remaining close to his home town working at Kingsgrove High School.

While working as a teacher, the former NRL player enjoyed a stint at Penrith Panthers as interim coach in 2011. He also coached the Greece national rugby league team, leading them to a record 90-0 victory over Hungary in Budapest on 27 October 2013.

“You don’t really think about coaching when you’re playing, but as you get older and towards the end of your career you kind of dip your toe in it.”

Georgallis continued working as a teacher up until 3 years ago, when he joined the Bulldogs coaching staff as NSW Cup Head Coach.

“I was brought up in the area…. and my mum and dad still live in the area, so I suppose when the opportunity arose to go back there as a coach, I already knew the area quite well.”

Georgallis was appointed as an Assistant to Dean Pay for the 2018 NRL Season, however joined on a full-time basis in 2019 following his success with the reserve grade side.

Greeks finding success in the NRL

“My father was born on a little island called Tilos near Rhodes in the Dodecanese islands, and he came here when he was about 18 after the second world war,” Georgallis says.

“He’s still living in Belmore, just up the road, and he loves his footy. Unfortunately though, he hasn’t been able to go out and watch any of the games because of the COVID-19.”

While many senior Greek NRL players are all but retired, the Greek coach says there are plenty of young guns ready to become future stars.

“You’ve got Billy Magoulias, who’s at the Sharks at the moment, and there’s a lot of young kids coming through,” Georgallis says excitedly.

“At South Sydney, there’s Peter Mamouzelos and Nick Mougios. There’s a young five-eighth Lachlan Ilias. They all came through the Souths under-20s team that won the title last year.”

With the Canterbury Bulldogs board still undecided who will fill Dean Pay’s shoes, Georgallis is looking to prove he has what it takes to coach the side to victory.